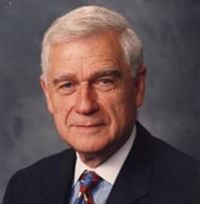 Mark Odom Hatfield (July 12, 1922 – August 7, 2011) was an American politician and educator. He was a Republican, even though he mostly voted with Democratic senators. He was born in Dallas, Oregon.

All content from Kiddle encyclopedia articles (including the article images and facts) can be freely used under Attribution-ShareAlike license, unless stated otherwise. Cite this article:
Mark Hatfield Facts for Kids. Kiddle Encyclopedia.