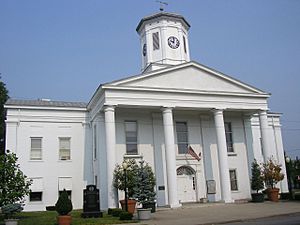 Cynthiana is a home rule-class city in Harrison County, Kentucky, in the United States. The population was 6,402 at the 2010 census. It is the seat of its county.

Two Civil War battles were fought in Cynthiana; the first on July 17, 1862, was part of a raid into Kentucky by Confederate General John Hunt Morgan; the second on June 11 and 12, 1864, resulted in defeat of Confederate forces on Morgan's last raid into the state.

On January 23, 1877, an LL chondrite meteorite fell in Cynthiana.

According to the United States Census Bureau, the city has a total area of 3.3 square miles (8.5 km2), all land.

The climate in this area is characterized by hot, humid summers and generally mild to cool winters. According to the Köppen Climate Classification system, Cynthiana has a humid subtropical climate, abbreviated "Cfa" on climate maps.

Cynthiana is served by the Harrison County School District with a total of seven public schools located within the county limits:

Cynthiana has one private school:

Cynthiana has a public library, the Cynthiana-Harrison Public Library.

All content from Kiddle encyclopedia articles (including the article images and facts) can be freely used under Attribution-ShareAlike license, unless stated otherwise. Cite this article:
Cynthiana, Kentucky Facts for Kids. Kiddle Encyclopedia.