Falls City is a city in Polk County, Oregon, United States. The population was 947 at the 2010 census. It is part of the Salem Metropolitan Statistical Area. 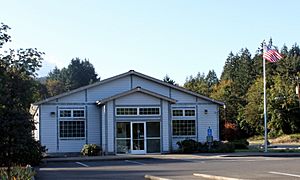 It is part of the Dallas micropolitan statistical area. Falls City is named after a waterfall in the Little Luckiamute River that passes through the center of town. In the past it was a lumbermill town and once had three mills in operation, a bank, hotel, soda shop, jail, and several grocery stores and bars. It formerly supported a large logging population and other population centers in the hills of the Coast Range, such as the smaller lumber-based community of Black Rock and the company-owned mill town Valsetz.

According to the United States Census Bureau, the city has a total area of 1.20 square miles (3.11 km2), all of it land.

The city of Falls City experiences hot and wet summers, and cold and dry winters. with no average monthly temperatures above 71.6 °F (22.0 °C). According to the Köppen Climate Classification system, Falls City has a hot-summer temperate climate, abbreviated "Csb" on climate maps. It's wettest month is July, with an average of 7.02 inches. 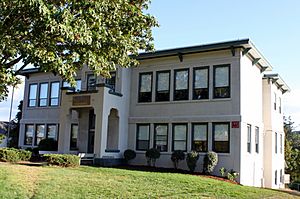 There were 366 households, of which 30.3% had children under the age of 18 living with them, 54.4% were married couples living together, 10.4% had a female householder with no husband present, 6.6% had a male householder with no wife present, and 28.7% were non-families. 22.7% of all households were made up of individuals, and 7.6% had someone living alone who was 65 years of age or older. The average household size was 2.59 and the average family size was 2.98.

All content from Kiddle encyclopedia articles (including the article images and facts) can be freely used under Attribution-ShareAlike license, unless stated otherwise. Cite this article:
Falls City, Oregon Facts for Kids. Kiddle Encyclopedia.