The Rocky Mountain Rendezvous was an annual gathering, held between 1825 to 1840 at various locations, organized by a fur trading company at which trappers and mountain men sold their furs and hides and replenished their supplies. The fur companies assembled teamster-driven mule trains which carried whiskey and supplies to a pre-announced location each spring-summer and set up a trading fair (the rendezvous). At the end of the rendezvous, the teamsters packed the furs out, either to normally the British Companies to Fort Vancouver in the Pacific Northwest for the British companies or to one of the northern Missouri River ports such as St. Joseph, Missouri, for American companies.

Rendezvous were known to be lively, joyous places, where all were allowed—fur trappers, Indians, native trapper wives and children, harlots, travelers and later tourists—who would venture from as far as Europe to observe the festivities. James Beckwourth describes: "Mirth, songs, dancing, shouting, trading, running, jumping, singing, racing, target-shooting, yarns, frolic, with all sorts of extravagances that white men or Indians could invent."

Rendezvous are still celebrated as gatherings of like-minded individuals. The fur trading rendezvous are celebrated by traditional black-powder rifle clubs in the U.S. and Canada. These events range from small gatherings sponsored by local clubs to large gatherings like the Pacific Primitive Rendezvous, the Rocky Mountain National Rendezvous, and others. They include many of the activities as the originals, centering on shooting muzzle-loading rifles, trade guns and shotguns; throwing knives and tomahawks; primitive archery; as well as cooking, dancing, singing, the telling of tall tales and of past rendezvous. Personas taken on by participants include trappers, traders, housewives, Native Americans, frontiersmen, free-trappers and others, including soldiers. 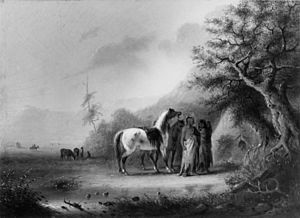 All content from Kiddle encyclopedia articles (including the article images and facts) can be freely used under Attribution-ShareAlike license, unless stated otherwise. Cite this article:
Rocky Mountain Rendezvous Facts for Kids. Kiddle Encyclopedia.