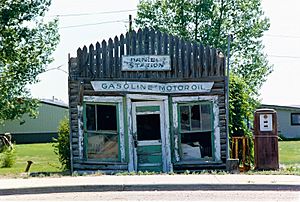 Daniel is a census-designated place in Sublette County, Wyoming, United States. The population was 150 at the 2010 census.

The town lies on U.S. Route 189, in the Green River valley as the water flows out of the Gros Ventre Range to Daniel's north and the Wind River Mountains to the town's east. Horse Creek, a Green River tributary that joins just west of Daniel, has its headwaters west in the Salt River Range. Thus bordered on three sides by nearby mountains, Daniel lies in the very northern, highest part of the large basin that defines much of southern Wyoming. Wyoming Highway 354 is a west-east road that intersects US Highways 189 and 191 north of town.

On July 5, 1840, Father Pierre-Jean De Smet offered the first Holy Mass (an important Christian worship ceremony) in Wyoming. A monument to the event stands on its site one mile east of Daniel.

According to the United States Census Bureau, the CDP has a total area of 5.1 square miles (13.2 km²), all of it land.

There were 41 households, out of which 24.4% had children under the age of 18 living with them, 53.7% were married couples living together, 9.8% had a female householder with no husband present, and 34.1% were non-families. 31.7% of all households were made up of individuals, and 4.9% had someone living alone who was 65 years of age or older. The average household size was 2.17 and the average family size was 2.74.

Public education in the community of Daniel is provided by Sublette County School District #1.

All content from Kiddle encyclopedia articles (including the article images and facts) can be freely used under Attribution-ShareAlike license, unless stated otherwise. Cite this article:
Daniel, Wyoming Facts for Kids. Kiddle Encyclopedia.