Genoa is an unincorporated town in Douglas County, Nevada, United States. Founded in 1851, it was the first settlement in what became the Nevada Territory. It is situated within Carson River Valley and is approximately 42 miles (68 km) south of Reno at 39.005,-119.846. The population was 939 at the 2010 census. 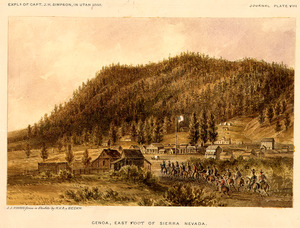 Located within the Utah Territory before the Nevada Territory was created in 1861, Genoa was first settled by Mormon pioneers. The settlement originated as a trading post called Mormon Station, which served as a respite for travelers on the California Trail.

Orson Hyde changed the name of the community to Genoa, after the Italian city. The original Mormon settlers withdrew in 1857 when they were recalled by Brigham Young due to the Utah War.

Genoa served as the first capital of the Nevada Territory in 1861, until it was moved that year to Carson City.

The community was the home to Nevada's first hotel, newspaper and court. Scenes from the 1973 movie Charley Varrick were filmed in Genoa, and the village was the set for the 1990 movie Misery, starring Kathy Bates, when the village doubled in size with buildings added and then removed after the filming. Food writer M. F. K. Fisher wrote a series of cookbook reviews for The New Yorker from her sister's home in Genoa during the 1960s.

Much of Genoa, including the original fort, station, and hotel, was destroyed in a fire in 1910, but a replica of the fort was built in 1947. Every year since 1919, Genoa has held a festival called the Candy Dance, where candy, food, and crafts are sold to support its town government. The Candy Dance is usually held during the final weekend of September. Many pioneers rest in the Genoa graveyard, including Snowshoe Thompson, his wife and his son.

A mile south of Genoa is David Walley's Resort, a famous natural hot springs and spa. It was first built in 1862 and known as Walley's Hot Springs. On October 1, 1934, Baby Face Nelson and members of his gang arrived at Walley's Hot Springs, hiding out for a month before returning to Chicago, where Nelson was shot by FBI agents.

Unlike that of its namesake, the Nevada community's name is pronounced with the accent on the second syllable rather than.

The Genoa Historic District, seven miles north of Minden, Nevada, is a portion of the community of Genoa which, as a 129.5-acre (52.4 ha) historic district was listed on the U.S. National Register of Historic Places in 1975. Historically known as Mormon Station, the historic area includes Late Victorian architecture; it includes a courthouse and city hall among 29 contributing buildings.

Genoa is significant as the first settlement in what is now the State of Nevada, having started in 1850 as a trading post on the Emigrant Trail to California, and developed as the community of Mormon Station by Mormons from the State of Deseret. Significant buildings in the historic district include a replica of the Mormon Station (1947?), the Masonic Hall (1868), the Genoa Bar (1855), a firehouse (1971), a store and gas pump (1971), and a courthouse (1865).

Genoa is located on the western edge of the Carson Valley, 7 miles (11 km) northwest of Minden, the Douglas County seat. Nevada State Route 206 enters Genoa from the south as Foothill Road, then turns east in the center of town onto Genoa Lane. According to the United States Census Bureau, the census-designated place of Genoa has a total area of 9.2 square miles (23.8 km2), all land.

The area has a Köppen Climate Classification of Csb, which is a dry-summer subtropical climate often referred to as "Mediterranean".

All content from Kiddle encyclopedia articles (including the article images and facts) can be freely used under Attribution-ShareAlike license, unless stated otherwise. Cite this article:
Genoa, Nevada Facts for Kids. Kiddle Encyclopedia.