Minden is a census-designated place (CDP) in Douglas County, Nevada, United States. The population was 3,001 at the 2010 census. It is the county seat of Douglas County and is adjacent to the town of Gardnerville. The Douglas campus of the Western Nevada College is located in Minden.

The Carson Valley and Minden are considered one of the top gliding spots in the world. Flights of over 990 miles (1,600 km) have been made on sailplanes from this location. Its location, east of the Sierra Nevada range, favors lee wave formation. East of the Pine Nuts mountains is the Nevada desert, one of the best thermal generators in the world. 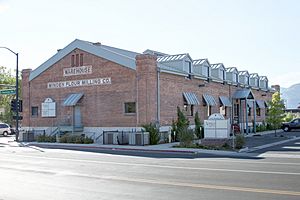 The Minden Flour Milling Company, September 2013, one of eight sites in Minden listed on the National Register of Historic Places

Scenes from the films Chicken Every Sunday (1949), The Wizard (film) (1989) and Charley Varrick (1973), were shot in Minden. Scenes for The Wizard (film) (1989) were filmed in the historic Minden Inn, which was disguised as a bus depot during the filming, and on Esmeralda Avenue, which can be seen when Beau Bridges throws a shovel into the street while chasing a car.

Minden has a public library, a branch of the Douglas County Public Library.

All content from Kiddle encyclopedia articles (including the article images and facts) can be freely used under Attribution-ShareAlike license, unless stated otherwise. Cite this article:
Minden, Nevada Facts for Kids. Kiddle Encyclopedia.