Sundance Resort, also known as Sundance Mountain Resort, is a ski resort located 13 miles (21 km) northeast of Provo, Utah. It includes more than 5,000 acres (2,000 ha) on the slopes of Mount Timpanogos in Utah's Wasatch Range. Alpine skiing began on the site in 1944. Actor Robert Redford acquired the area in 1968, and established a year-round resort that would later spawn the independent Sundance Film Festival and the non-profit Sundance Institute. The resort was first listed as a census-designated place (CDP) before the 2020 census.

The area known today as the Sundance Resort in the North Fork canyon was surveyed in the mid-1800s by Andrew Jackson Stewart Jr. and his sons, Andrew, Scott, and John Stewart. While working for the U.S. government they discovered the view of Mt. Timpanogos. They each received 160 acres of land under the Homestead Act, and nearby lots were given to family members. Soon, members of the Stewart family erected log cabins. By 1911, they owned 2,200 acres and were raising sheep and cattle. They formed a company, North Folk Investment Co., in order to share income and protect the land. The area was known as "Stewart Flats" due to the large number of Stewart family members living in the area.

To get to "Stewart Flats" in North Fork before 1920, there was only one unpaved road that had a grade of 18 to 20 degrees on the last half mile. It was referred to as the "big dugway" due to the trench formed from dragging large trees down the road. In the early 1920s, an automobile road was built by the Utah County Commission that passed through "Stewart Falls" as it connected Aspen Grove and Wildwood, Utah.

Mount Timpanogos became a popular mountain to hike after 1912, when Eugene L. Roberts, a professor at Brigham Young University opened a hiking trail and took his students. This hike only included 22 students, but sparked the annual Timpanogos Hike. The Timpanogos Hike began after mid-July when there was a full moon. The night before the hike, participants would gather for a celebration that usually had a bonfire. A favorite part of the celebration was the enactment of the "Legend of Timpanogos" that tells the story of an Indian princess who falls in love with a soldier who goes off to war; the soldier did not return, but she watched and waited for him atop Mount Timpanogos until she died.

In 1922, the Forest Service over the Wasatch National Forest, part of the United States Department of Agriculture, requested to put in a trail that crossed part of the property owned by the North Folk Investment Co, The Stewart family appreciated the hikes since they brought more popularity to the area. Today, the trails around the Sundance Mountain Resort offer views of North Fork, Utah and of Stewart Falls. Many trails also feature plaques to mark flora and fauna in the area and are lined with benches. There are also 3 major biking trails at Sundance that even have ski-lift service after Memorial Day weekend.

Ski races began on the Mount Timpanogos Glacier during the annual Timp Kike in July 1941. The race was a slalom race. This race would be held three more times in 1947, 1948, and 1949. A ski area later opened as Timp Haven in 1944. The name was chosen by a contest in which anyone could submit their suggestion. Ruth Biddulph submitted the winning name of Timp Haven and was given a season pass. Timp Haven was owned by S. Paul Stewart and run with the help of his brother Ray Stewart for over twenty years. Paul managed the slopes, built the ski lodge, and installed the water system. Ray Stewart was responsible for clearing and developing the Timp Haven Ski Resort and contributed to the original rope tow used. Hilda Stewart, Paul's wife, had a cafe on the resort property and served hamburgers and other meals to ski guests. Paul later purchased the interests of other members of the Stewart family, which altogether owned between 3,000 and 4,000 acres of the property. The investment in the land in North Fork never paid dividends for the North Fork Investment Company owners. 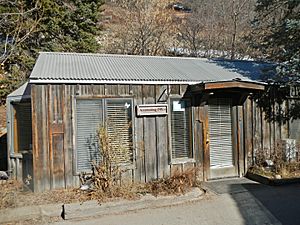 The resort had a rope tow that was built by J.W. Daniel, who had tried to make a tow in Hobble Creek Canyon near Springville, Utah. The tow was powered by a Chevrolet truck, but was unsuccessful in that area. The Timpanogos Mountain Club persuaded Daniel to bring the tow to North Fork Canton. The tow was not ready for winter of 1944, and so it was abandoned by the club. Ray Stewart bought the truck and equipment and overhauled it to create a working tow to run on Saturdays and Sundays. The tow was difficult to use, however, because some of the roads leading to the resort were not plowed regularly making it difficult to drive the truck, and cold mornings caused the vehicle to freeze over. The tow pulled skiers 500 feet up the mountain. In addition, When Timp Haven opened, the creek was closer to the hill than it is today, so skiers had to make a quick turn at the bottom to avoid falling into the water. Ski season at Timp Haven started around Christmas and lasted util early March. A day pass to ski was only $1, and due to lighting installed by Provo City, Timp Haven allowed night skiing on Mondays, Wednesdays, and Fridays. While owned by the Stewart family, the ski area was closed on Sundays. Timp Haven also held ski races that were sponsored by various local organizations like the Timpanogos Ski Club or the Hoover Cup. The Timponogos Mountain Club cleared an area on the east hill and built a 45-foot ski jump.

Ski classes at the resort were started by Jessie Scofield, the supervisor of Provo City Recreation, in the winter of 1946. Professors at Brigham Young University also started ski classes, bringing buses of students in the afternoons. By that time, Timp Haven also had a tubing and toboggan hill. The Stewart family began expansion in 1947, and a T-bar lift was added at the base in 1948 (the same year as the ski jump was rebuilt) which was about 1,000 feet (300 m) in length, The lower terminal was seated on a platform that was 14 feet in the air. A 1938 Ford truck provided the power for the lift. This lift ran until 1953 when a single chairlift was added in the fall. It had a length of about 2,500 feet (760 m). The first double chairlift was installed in the fall of 1965 and replaced the lower single chair and an upper T-bar, vertically climbing 1,400 feet (430 m). It had an accident the following July which resulted in two fatalities. The resort continued expanding, however, and a lodge was built in 1957 (whose foundation is under the General Store and Grill Room today). A poma lift was added in 1958. A modern ski lift, the Mandan, was installed in 1964 and the two T-bar lifts were removed. The Navajo lift was installed in 1969, and the Arrowhead lift in 1985.

The Stewart family built a subdivision on "Stewart Flats" in the 1960s called Timp Haven Homes. Robert Redford purchased a 2-acre lot. Later, in August 1968, Redford purchased the entirety of Timp Haven, the land that is now known as Sundance, The resort was renamed from Timp Haven to Sundance, however, the name is not named after the role he played in the 1969 film, Butch Cassidy and the Sundance Kid. Its name is derived from multiple associations of private importance to Redford. One is the respect given to the Native American Sun Dance, while another refers to how the sun dances around the rim of the mountains throughout the day. The resort of Sundance is not to be confused with the town of Sundance, Wyoming, the location from which the Sundance Kid received his name. Redford's 1972 film Jeremiah Johnson was filmed near the resort.

Because of its lower elevation, the resort had a shorter ski season than its competitors. In order to increase revenue, Redford wanted to create an Aspen-like atmosphere and use the resort to promote the arts and draw in Hollywood stars. The Sundance Film Festival was held at the resort to help it achieve this purpose. 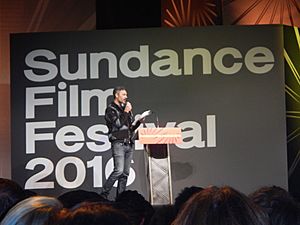 Taika Waititi at the Sundance Film Festival in 2016

In 1985, the Sundance Institute took over operations of the United States Film Festival. The organization had been founded in 1978, however, it became a part of Sundance, and in 1989 the name was officially changed to the Sundance Film Festival. In 1985 Redford hosted the first film festival at Sundance to promote independent films. Redford initially objected to taking over the film festival, and in its early years it was "regarded by many [film] distributors as toxic". In 1989, however, the film festival gained recognition after its showing of lies, and videotape by Steven Soderbergh. That was the year the festival began to achieve its goal of shaping independent film making. Although it has increased in popularity, the film festival has maintained its support of the making and distribution of indie films.

Today, the Sundance Film Festival is held each year in January and primarily 30 miles (50 km) north in Park City, and is a popular and well-known competition for independent film makers. It is the largest independent film festival in the United States, and also one of the largest in the world. It features documentaries, large films and small films. The festival receives over 9,000 submissions, and around 200 are featured. More than 50,000 people attend the festival each year, from celebrities to average citizens.

The small town that surrounds the resort is home to 28 full-time residents, with many residents living in the area more than 50 years. Several notable people have owned residencies in the Sundance Resort properties, including Sidney Pollock, William Devane, and Daniel Melnick. 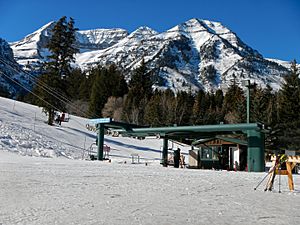 Today, Sundance Mountain Resort has skiing for every ability, with 20% beginner trails, 40% intermediate trails and 40% advanced trails. The resort terrain climbs 2,150 vertical feet (655 m) up the northeast slope of Mount Timpanogos, reaching the crest of the ridge at Bearclaw Cabin. This restaurant at the resort's apex of 8,250 feet (2,515 m) provides spectacular 360° views of the surrounding landscape, and of Mount Timpanogos as it rises to a height just short of 12,000 ft (3,660 m).

In 1994, a new quad lift was added to Sundance that was named "Ray's Lift" to honor Ray Stewart and all of the work he put into developing Timp Haven. the lift offers direct access to the back of the mountain and covers over 5,400 feet with a vertical rise of 1,400 feet. This lift has a capacity of 1,800 skiers uphill and 900 downhill. The mountain is serviced by four chairlifts and a handle tow for beginners at the mountain's base. Sundance now offers the 6th longest zip line in the United States which features the most vertical drop of any zip line on the North American Continent. In 2015, Sundance Mountain Resort decided it would retire its triple chair Arrowhead lift and replace it with a quad chair lift. The new quad chair lift is named "Reds Lift" in honor of Robert Redford and his family. The new quad lift is fully functioning and ready for the 2016-2017 ski season. Reds Lift will be able to carry 500 more people uphill per hour; therefore reducing the waiting time in line and enabling more time on the mountain. [31]

All content from Kiddle encyclopedia articles (including the article images and facts) can be freely used under Attribution-ShareAlike license, unless stated otherwise. Cite this article:
Sundance Resort Facts for Kids. Kiddle Encyclopedia.