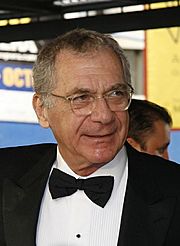 Pollack was born in Lafayette, Indiana. During his childhood he moved to South Bend, Indiana. He moved to New York City when he was 17.

He won an Emmy Award in 1966. He won two Academy Awards and a Golden Globe Award for 1985 movie Out of Africa.

All content from Kiddle encyclopedia articles (including the article images and facts) can be freely used under Attribution-ShareAlike license, unless stated otherwise. Cite this article:
Sydney Pollack Facts for Kids. Kiddle Encyclopedia.