Powder Mountain is a ski resort east of Eden, Utah, stretching between Weber and Cache counties and 55 miles (89 km) from Salt Lake City International Airport. Covering 8,464 acres (13.2 sq mi; 34.3 km2), Powder Mountain is the largest ski resort in the US by skiable acreage. The resort has 154 trails, nine lifts, and two terrain parks.

Powder Mountain had its beginnings as the winter range for Frederick James Cobabe’s sheep herd. Between 1902 and 1948, Cobabe continually accumulated land around Eden, Utah. Old timers say that his property was severely overgrazed by previous owners and hardly a blade of grass could be found. The watershed was so poor that Wolf Creek dried up each fall. Fred’s soil conservation practices greatly improved the vegetation and Powder Mountain now is known as one of the best watersheds in the Wasatch Mountains.

Fred’s son, Dr. Alvin F. Cobabe, bought the livestock company with its 8,000 acres in 1948. While horseback riding with friends along Lightning Ridge in the 1950s, someone casually mentioned that the terrain would make a great ski resort. The idea rang true with Dr. Cobabe and he began to amass adjacent property adding to the thousands of acres acquired from his father. When the resort opened on February 19, 1972, he owned 14,000 acres.

Only the Sundown lift was open during Powder Mountain’s first season. The area was lit for night skiing and a ski school was established. Food was prepared on an outdoor barbecue. The Main Lodge, the Sundown Lodge and the Timberline lift were added to operations in the 1972–73 season.

The slopes on both sides of the road leading up to the resort—known as Powder Country—are served by a bus that will pick riders up at a waiting area halfway down the access road. There is also an $18 per-ride Snowcat service up Lightning Ridge (very close to James Peak). James Peak is one of the premier powder bowl runs in Utah.

Powder Mountain’s terrain within the lift accessible area offers a wide variety of runs for riders of every skill level, including a large assortment of green, blue and blacks runs. With over 2,500 inbound vertical feet available and over 400 inches of annual snowfall, Powder Mountain is largely considered to be one of the premier powder skiing destinations in the world.

Powder Mountain also offers ski-in, ski-out condos for rent at the summit, making it a convenient getaway for skiers of all levels. 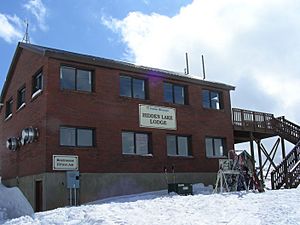 All content from Kiddle encyclopedia articles (including the article images and facts) can be freely used under Attribution-ShareAlike license, unless stated otherwise. Cite this article:
Powder Mountain Facts for Kids. Kiddle Encyclopedia.