Lone Peak, a mountain peak southeast of Salt Lake City, Utah, United States is the center of the Lone Peak Wilderness, established in 1978. With an elevation of 11,260 feet (3,430 m), it is one of the taller peaks in the Wasatch Range along the Wasatch Front and tends to be a favorite hike. Lone Peak consists almost entirely of quartz monzonite (a granitoid, or granite-like) rock of the 30.5 million year old Little Cottonwood Stock. Quartzite and limestone are also found in distal locations on the mountain. The mountain from Little Cottonwood Canyon on the northern end to Corner Canyon on the southern end is called "Mount Jordan", the highest peak of which is Lone Peak, with other lower peaks being Enniss Peak and Bighorn Peak. The Peak ranks 98th on a list of Utah peaks with 500 feet (150 m) topographic prominence.

It is possible to reach the summit in one long day, but rock climbers often camp at the base of the summit and non-climbers often camp lower on the Jacob's Ladder Trail. There are a few streams that dry up before summer, so water must be carried in. There is reputedly a spring that runs year-round.

Important features of this trail are that it has a year-round spring (cold springs) located at 40°30′58″N 111°47′35″W﻿ / ﻿40.51611°N 111.79306°W﻿ / 40.51611; -111.79306 and a small cabin in a meadow. The route gains altitude in the beginning, going through a steep scrub oak section. After a few hours of hiking, things change as the trail levels off and veers north into the trees crossing the water of cold springs in bear canyon. The trail climbs out of the drainage on the north side into a new drainage, but stays generally below the ridge line. The trail eventually opens into a meadow with a small cabin in the large pine trees. The trail continues up above the cabin to the southeast and crosses over to the south into another drainage at a low point on the ridge. The southeast top of the new drainage meets up with the main granite drainage running roughly north-south which leads to the Lone Peak Cirque via stacked rock cairns. An alternate route is to roughly follow the stream bed up the drainage until the top of the ridge that runs roughly north-south above a granite drainage is reached. Round trip mileage is about 16 miles with 6,876 feed of vertical gain. 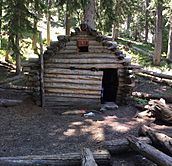 The Outlaw Cabin, located at 40°31′12″N 111°46′53″W﻿ / ﻿40.52000°N 111.78139°W﻿ / 40.52000; -111.78139 on the southwest side of a meadow, was constructed in the summer of 1960 by the Allen Brothers and Alan Summerhays. Construction was completed in 1967 prior to the area being designated as a wilderness area. The cabin has three cots, a pot belly stove, cabinets, and two small windows. It is built from trees downed in the area and the roof is lined with plastic and dirt/grass for insulation. All the materials besides the trees were hauled to the location by horseback. The cabin is partially hidden by large trees. In October 1997, a Draper family was caught in a blinding snow storm and took shelter in the cabin until they were rescued. There is a journal in the cabin that visitors can add their stories to.

All content from Kiddle encyclopedia articles (including the article images and facts) can be freely used under Attribution-ShareAlike license, unless stated otherwise. Cite this article:
Lone Peak (Utah) Facts for Kids. Kiddle Encyclopedia.