The Great Salt Lake effect is a small but detectable influence on the local climate and weather around the Great Salt Lake in Utah, United States. In particular, snowstorms are a common occurrence over the region and have major socio-economic impacts due to their significant precipitation amounts. The Great Salt lake never freezes and can warm rapidly which allows lake enhanced precipitation to occur from September through May. Lake-enhanced snowstorms are often attributed to creating what is locally known as "The Greatest Snow on Earth". 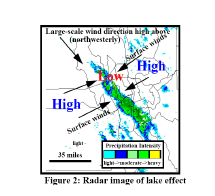 Lake-effect snow around the Great Salt Lake is generated in a similar fashion to elsewhere in the world. However, the Great Salt Lake primarily provides a lifting mechanism and acts as an atmospheric destabilizer, which encourages convection. This is in contrast to the Great Lakes, where the lakes contribute significant amounts of moisture and latent heat.

Great Salt Lake enhanced precipitation occurs when a strong, cold, northwesterly wind blows across a relatively warm lake. This is common after a cold front passage, where the winds are predominantly northwesterly and the air is much colder than the lake. When the land-lake breeze blows towards the lake, there is a convergence zone that acts to channel the cold air over the center of the lake and further enhance precipitation. The salinity of the Great Salt Lake prevents freezing but reduces the saturation vapor pressure and latent heat flux into the overlying air. As a result, minimal amounts of moisture and latent heat are added to the air moving over the lake. The high relief of the Wasatch mountains further capitalizes on lake enhancement and can receive multiple feet of snow from lake-effect alone.

The number of events varies considerably from year to year, according to the synoptic set-up. The average is 4 to 5 well-defined events annually and the same number of marginal events. Slightly more than half of the well-defined events persist for 13 to 24 h. In a 2000 study, researchers found that the larger number of cases were between October and February, with outlier cases in September and April or May. However a review of many more cases in 2012 found that the peaks of activity was really in the fall (mid-October to mid-December) and spring (early April) and that there was a minimum between those maximum. That same study found on average 13 events per year, well or not so well defined combined.

Most well-defined events leave accumulations of 8 inches (20 cm) or more, and in some cases more than 40 inches (100 cm), along a well-defined corridor.

Forecasting skill has drastically improved in recent years due to a better observational network including the NEXRAD weather radar system. An accurate forecast involves identifying the crucial requirements for lake-effect precipitation. The basic requirements are a conditionally unstable environment, significant moisture and a lifting mechanism. Many different variables go into these requirements. Through extensive analyses and field experiments the understanding of lake-effect snowstorms has improved drastically in recent years. Many general rules of thumb have been developed in order to predict the occurrence, location and severity of lake-effect snow.

A set of rules has been developed by local forecasters to predict the development of lake enhanced snow:

All content from Kiddle encyclopedia articles (including the article images and facts) can be freely used under Attribution-ShareAlike license, unless stated otherwise. Cite this article:
Great Salt Lake effect Facts for Kids. Kiddle Encyclopedia.