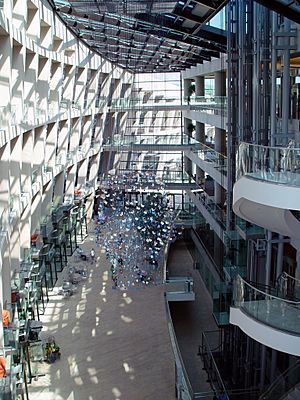 An Interior View of the "Urban Room"

The Salt Lake City Public Library was originally housed in the Salt Lake City and County Building in 1898. Thanks to a donation of land and money by a John Quackenbos Packard in 1900, a new library was built in downtown Salt Lake City; the building is now listed on the National Register of Historic Places. This building remained in use until the library outgrew it by the early 1960s. The city library was then moved to a new home across from the City and County Building at the intersection of 500 South and 200 East. The groundbreaking ceremony was held on December 28, 1962, and the building was dedicated on October 30, 1964. In 1965, the old library was renovated into the Hansen Planetarium, funded by a donation of $400,000 from Beatrice M. Hansen.

Move to the current location

After celebrating the library's 100th anniversary in early 1998, an $84 million library bond was approved to relocate the library in a new building, north half a block, to its current location. The firm Moshe Safdie and Associates partnered with a local architecture firm, VCBO Architecture, to design the building, which opened to the public in February 2005. The former building in Library Square houses The Leonardo, a museum of science, technology and creativity.

On September 15, 2006, a small bomb exploded in the third floor of the main building. No one was hurt, and the damage sustained by the building was a broken window. Eastbound traffic on the streets of 400 South and 200 East was closed as 400 people were forced to evacuate.

The Salt Lake City main library covers an area of 240,000 square feet (22,000 m2) in a five-story tall, wedge-shaped building. The library's collection comprises over 500,000 books, subscriptions to over 60 newspapers and magazines, 163 internet-capable computers.

The structure includes 44,960 cubic yards (34,370 m3) of concrete, and 176,368 square feet (16,385.1 m2) of glass, including a five-story curved glass outer wall. Designed by the same architect, the downtown Central Branch of the Vancouver Public Library shares a similar design—most clearly apparent in the main foyer and the sweeping outer facade.

Library Square, a landscaped and paved plaza, encompasses the building's footprint. Originally, much of what is now landscaped open space had been planned to be covered by outbuildings, but Mayor Rocky Anderson asked for these to be left out in favor of creating a public park. Several shops, and the studios of radio station KCPW-FM occupy the Square. The Square itself is paved with limestone from Israel.

Upon entering the five story building, one enters the "Urban Room", which has the same limestone paving as the square. The room extends upward for all five floors and ends with a skylight of 20,000 square feet (1,900 m2). More shops line one side of the Urban Room.

A rooftop garden completes the structure. It is planted with trees, grasses, flowering bulbs and various perennial plants, as well as supporting beehives.

The whole library depends on natural lighting, reducing the need of lights in the library. A huge five story glass wall provides daylight. 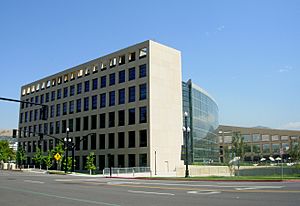 Other features of the library include:

All content from Kiddle encyclopedia articles (including the article images and facts) can be freely used under Attribution-ShareAlike license, unless stated otherwise. Cite this article:
Salt Lake City Public Library Facts for Kids. Kiddle Encyclopedia.