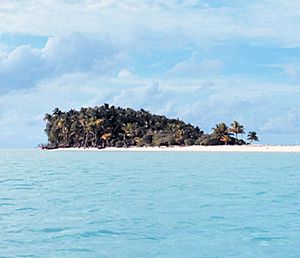 Helen's Reef, in Palau, is a desert island

A desert island is an island where no people live. More commonly they are called uninhabited islands. Sometimes the name is also used for an islet or atoll. Very often, such places are seen as close to paradise. Most islands in the world are uninhabited. The reason why an island is uninhabited are often practical:

Among the biggest uninhabited islands:

All content from Kiddle encyclopedia articles (including the article images and facts) can be freely used under Attribution-ShareAlike license, unless stated otherwise. Cite this article:
Desert island Facts for Kids. Kiddle Encyclopedia.