Kids Encyclopedia Facts
This page is about Shawnee County, Kansas. For the city in Johnson County, see Shawnee, Kansas.

Shawnee County (county code SN) is located in northeast Kansas, in the central United States. As of the 2020 census, the population was 178,909, making it the third-most populous county in Kansas. Its most populous city, Topeka, is the state capital and county seat. The county was one of the original 33 counties created by the first territorial legislature in 1855, and it was named for the Shawnee tribe of Native Americans. 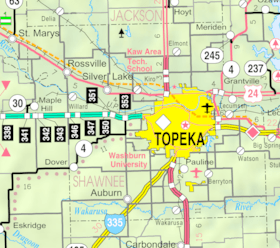 Map of Shawnee County from History of Kansas, 1899

Before the treaty of 1854, the area now known as Shawnee County was inhabited by Shawnee, Kansas, and Pottowatomie Indian tribes. Westward expansion brought the country its first white settler in 1830 when Frederick Choteau opened a trading post on American Chief (now Mission) Creek. In 1855, Shawnee became one of the first counties established by the Kansas territorial legislature with a population of 250. General H. J. Strickler, of Tecumseh, who was a member of the council in 1855, and also of the joint committee on Counties, claimed Shawnee for the name of his county. At that time, Shawnee County borders were entirely south of the Kansas River and extended south to include Osage City and Carbondale. The legislature later desired to make Topeka the county seat and moved the borders of the county to their present locations to make Topeka centrally located in the county.

1855 also saw the first ever meeting of the Shawnee County Board of Commissioners. Tecumseh was the first county seat, and the first county courthouse was opened there in 1856. The building was 40x50 feet but was never finished. Topeka was made the county seat by popular vote in 1858, and a new courthouse was built at 4th Street and Kansas Avenue in 1867. In 1896, a new larger courthouse was constructed at 5th and Van Buren, with more than 50,000 residents then living in the county. That building remained in use until the current courthouse at 7th and Quincy opened in 1965.

Concerning the origin of the names in this county, it is generally understood that Shawnee County receives its name from that well known tribe of Indians.

When the county was originally formed in 1855, it was bounded by the Kansas River on the north, and the southern boundary was nine miles (14 km) further south. But on February 23, 1860, the legislature changed the boundaries with the southern portion being granted to Osage County, and the northern boundary was moved a few miles north of the river (to the second standard parallel). The present northern line (six miles north of the second standard parallel) was established in 1868.

The Kansas River runs east across the county, just north of the center, being bordered on its north bank by the townships of Rossville, Silver Lake, Menoken, and Soldier, and on its south bank by the townships of Dover, Mission, and Tecumseh. The city of Topeka primarily lies to the south of the river. There is little or no current major river traffic, but it is used extensively for irrigation in the county. Major creeks emptying into the Kansas River include Cross, Soldier, Mission, Indian, and Shunganunga Creeks. The Wakarusa River, which, flowing east and northeast, empties into the Kansas River in the northeastern part of Douglas County. It has its sources in the township of Auburn, and waters the southern sections of Auburn, Williamsport and Monmouth—the tributary creeks flowing into it on either side forming the drainage and water system of the three townships.

The soil is a rich dark loam, varying from fifteen feet in some parts of the bottoms, to a uniform surface covering the upland prairie from one to three feet. The underlying formation is limestone. Beds of clay, are well distributed. Coal is found in detached and non-continuous beds, and is mined in a small way for local purposes in Topeka, Soldier and Menoken.

Along the western border the landscape is hilly with the Flint Hills a few miles further west in Wabaunsee County. Burnett's Mound, the highest point in the county, is situated in the southwest part of Topeka. The land is described in the government and county surveys as "bottom land, 31%; upland, 69%; forest 8%; prairie, 92%." Wooded areas are mainly found along rivers and creeks with no true forests. The growth consists of elm, cottonwood, black walnut, oak, sycamore, box elder, hickory and ash.

The county consists of twelve townships: Soldier, Menoken, Silver Lake, Grove, and Rossville north of the Kansas River; Tecumseh, Topeka, Mission, and Dover south of the river; and Monmouth, Williamsport, and Auburn in the southernmost tier of townships occupying the Wakarusa River valley. Being a city of the first class, the city of Topeka is independent of any townships and excluded from the census figures for the townships. It occupies over ten percent of the county's land area and ranks fourth in population among all cities in Kansas. Altogether, the county has five incorporated cities with the other four being cities of the third class: Auburn, Rossville, Silver Lake, and Willard.

Tecumseh Township was one of the two original townships formed in 1855, and it originally extended over all the county south of the Kansas River to the Wakarusa River. Yocum Township, named after county commissioner William Yocum, was the other, and it contained the area south of the Wakarusa River. The formation of the townships of Topeka (1857) and Monmouth (1860) reduced Tecumseh Township to its current greatest extent of about seven miles (11 km) from north to south from the Kansas River and less than seven miles (11 km) from east to west from the county's eastern border. Small portions in the western part have been annexed by the city of Topeka, and its present area is 36 square miles (93 km2). It contains the (unincorporated) towns of Tecumseh, Spencer, and Watson. The town and township were named for the famous Shawnee chief.

Topeka Township was carved out of the western portion of Tecumseh Township in 1857. Following the creation of newer townships and annexations by the city of Topeka, the size of the township has been significantly reduced. It currently occupies an area of 12 square miles (31 km2), and it is in extent about three miles (5 km) from north to south and five miles (8 km) from east to west. It contains the town of Pauline.

Monmouth Township, located in the southeastern corner of the county, has an area of 56 square miles (150 km2). In extent it is eight miles (13 km) north to south and seven miles (11 km) east to west. It contains the town of Berryton. Richland, which was located in the far southeast corner of the township, was purchased by the U.S. Army Corps of Engineers in the late 1960s as a part of the land acquired for Clinton Lake. By 1974, the town was vacated and the remaining buildings were demolished shortly thereafter.

Williamsport Township, established in 1860, was named after Williamsport, Pennsylvania. With an area of 41 square miles (110 km2), it is in extent six miles (10 km) from north to south to the county's southern border and seven miles (11 km) from east to west between Monmouth and Auburn townships. It contains the towns of Wakarusa and Cullen Village and the greater portion of Forbes Field (airport).

Auburn Township, 56 square miles (150 km2) in area, occupies the southwestern corner of the county. In extent it is six miles (10 km) from north to south and ten miles (16 km) from east to west, and it contains the city of Auburn.

Dover Township was carved from northern portions of Auburn Township in 1867 and named after Dover, New Hampshire. In extent it is twelve miles (19 km) from north to south from the Kansas River and six miles (10 km) from east to west to the county's western border, with an area of 57 square miles (150 km2). It includes the city of Willard and the towns of Dover and Valencia.

Mission Township was formed from portions of Dover and Topeka townships in 1871. Northeastern portions of the township have been annexed by the city of Topeka in years since. It currently occupies an area of 32 square miles (83 km2), and its greatest extent is not more than eight miles (13 km) from north to south and six miles (10 km) from east to west. It contains numerous subdivisions and the Sherwood Lake area.

Soldier Township was organized following the change in the county's borders in 1860, and it contained all of the county north of the Kansas River until the formation of Silver Lake Township in 1868. A southern portion of the township has been annexed by the city of Topeka. With an area of 63 square miles (160 km2), it is in extent less than ten miles (16 km) from north to south from the county's northern border and less than eight miles (13 km) from east to west from the county's eastern border. It contains the town of Elmont.

Silver Lake Township was carved out of the western portion of Soldier Township after the county's northern border was moved in 1868. The formation of the surrounding townships of Rossville (1871) to the west, Menoken (1879) to the east, and Grove (1918) to the north has reduced the size of the township. With an area of 18 square miles (47 km2), its greatest extent is about five miles (8 km) from north to south to the Kansas River and five miles (8 km) from east to west. It contains the city of Silver Lake, and it is named after a crescent-shaped lake located near the city.

Rossville Township, occupying the northwestern corner of the county, was carved out of the western part of Silver Lake Township in 1871. It has an area of 52 square miles (130 km2), and its greatest extent is about nine miles (14 km) from north to south to the Kansas River and seven miles (11 km) from east to west. It includes the city of Rossville. The township and city were both named for William W. Ross, the brother of Senator Edmund G. Ross.

Menoken Township, 45 square miles (120 km2) in area, was carved out of the eastern portions of Silver Lake Township in 1879. Extending from the county's northern border to the Kansas River, it is not more than eleven miles (18 km) in extent from north to south and less than five miles (8 km) from east to west. The township's name is derived from a Native American word meaning "fine growth" or "a place for fine growing".

Grove Township is the youngest of the townships. It was carved out of the northern portion of Silver Lake Township in 1918. Very little remains of its only town, Grove. With an area of 30 square miles (78 km2), the township is six miles (10 km) in extent from north to south from the county's northern border and five miles (8 km) from east to west between Menoken and Rossville townships.

Shawnee County is included in the Topeka Metropolitan Statistical Area, which had an estimated population of 232,594 in 2018. 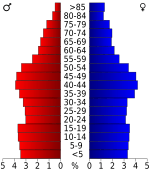 Forbes Field Air National Guard base and airport is south of Topeka near Pauline. The airport was served by Allegiant Air with biweekly service to Las Vegas. Other airports in the county include Philip Billard Municipal Airport in the Oakland neighborhood of Topeka.

As a city of the first class, Topeka is considered governmentally independent and is excluded from the census figures for the townships. In the following table, the population center is the city included in that township's population total.

All content from Kiddle encyclopedia articles (including the article images and facts) can be freely used under Attribution-ShareAlike license, unless stated otherwise. Cite this article:
Shawnee County, Kansas Facts for Kids. Kiddle Encyclopedia.