Topeka Regional Airport is used by the University of Kansas (KU) for charter flights for its athletic teams and by schools visiting the KU campus in Lawrence, which is 34 miles (55 km) east of the airport via the Kansas Turnpike. (Kansas City International Airport is 51 miles (82 km) from KU).

Topeka Regional Airport (formerly Forbes Field) is on the site of the Topeka Army Airfield, later Forbes Air Force Base, a former Strategic Air Command (SAC) facility that transferred to Tactical Air Command in 1964 (while retaining SAC-gained tenants) and closed in 1973. Most of the former base administrative area is now used for offices and an industrial park. The 190th Air Refueling Wing (190 ARW) of the Kansas Air National Guard also uses part of the airport as an cantonment area and Air National Guard installation in support of KC-135 Stratotankers.

From 1942 to 1973 the following Air Force components supervised the airfield:

In April 1976, with the exception of those portions retained by the Air National Guard, most of the former Forbes Air Force Base was turned over to the city of Topeka and Shawnee County. During this transition, all commercial air service moved from the Philip Billard Municipal Airport to the newly established Forbes Field. On June 1, 1976, Frontier Airlines provided the first jet service out of Forbes Field. In 1981 a bond to build a new air terminal was rejected, but then approved a year later in 1982. The new $5 million terminal was completed in 1985. The terminal includes 5 airline ticket counters and 2 rental car counters. Currently Hertz is the only rental car company at FOE. There is also one baggage claim carousel. Several charter and military flights still use the terminal today. Topeka had several carriers in the mid-1970s to late-1980s, including Air Midwest, Frontier, Midway, TWA and United Airlines. During this period, Forbes Field handled up to 180,000 passengers per year. After the major carriers pulled out, commuter flights remained at Forbes Field.

As recently as November 2003 Air Midwest had flights, codeshared with US Airways Express, on 19-passenger planes between Topeka and Kansas City. Scheduled passenger service was subsidized by the Essential Air Service program until May 2003, when it was terminated due to federal law not allowing a subsidy over $200 per passenger for communities within 210 miles of the nearest large or medium hub airport (Kansas City International Airport, a medium hub, is 71 miles away).

In 2012 the MTAA Board of Directors renamed the facility to Topeka Regional Airport and Business Center, maintaining the name of the airfield as Forbes Field. Topeka Regional Airport is currently the home of the Kansas Air National Guard's 190th Air Refueling Wing and the 1st Battalion, 108th Aviation Regiment, Kansas Army National Guard. (information from MTAA website http://www.mtaa-topeka.org/about/airport-history/topeka-regional-airport Accessed on September 23, 2013) 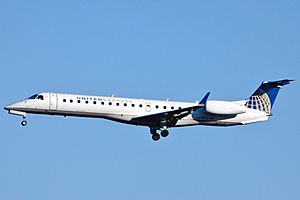 United Express was the most recent airline serving Topeka Regional Airport, with non-stop flights to Chicago-O'Hare, until the service was discontinued in September 2014.

This Airport is not currently served by any airline.

All content from Kiddle encyclopedia articles (including the article images and facts) can be freely used under Attribution-ShareAlike license, unless stated otherwise. Cite this article:
Topeka Regional Airport Facts for Kids. Kiddle Encyclopedia.