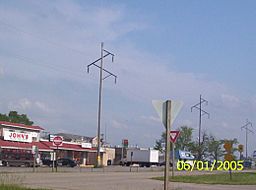 Pauline is located on southwest Topeka Boulevard, just a few miles from Heartland Park Race Track. The population, excluding the Montara subdivision, is between 100 and 230 people. There are about 30 houses along with about 20 mobile homes in the mobile home park. Businesses there include three restaurants, two gas stations, an auction house, a bar, a laundromat, and a grocery store. Pauline also has a Super 8 Motel and a modern campground with hook-ups. Pauline is served by the Auburn-Washburn Unified School District 437, with Pauline Central Primary and Pauline South Intermediate being located southwest of Pauline in the Montara subdivision.

The first post office in Pauline was established in 1872.

All content from Kiddle encyclopedia articles (including the article images and facts) can be freely used under Attribution-ShareAlike license, unless stated otherwise. Cite this article:
Pauline, Kansas Facts for Kids. Kiddle Encyclopedia.