The Topeka Zoo (formally the Topeka Zoological Park) is a medium-sized zoo in Topeka, Kansas in the United States. It is located within Gage Park, just off I-70 in the north central portion of the city. Despite its size, it houses over 250 animals in a number of exhibits, including one of the first indoor tropical rain forests in the United States. It is one of the most popular attractions in Topeka, with over 200,000 visitors a year.

The Topeka Zoo is an accredited member of the Association of Zoos and Aquariums (AZA). 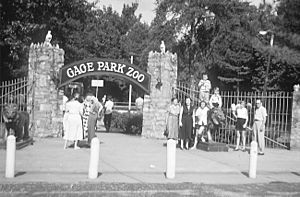 Entrance gate The zoo was originally known as the Gage Park Zoo.

The Gage Family donated 80 acres (32 ha) to the city of Topeka in 1899 to use for a public park. Over the years, the park has accumulated playgrounds, a swimming pool, a fishing lake, a mini train, a rose garden, and a carousel.

The zoo was opened in the park in 1933. Additional exhibits were constructed over the years, and in 1963 the city hired its first zoo director, Gary K. Clarke. The first major facility at the zoo was constructed in 1966 to house large mammals. Clarke went on to get many of the current exhibits constructed, including Gorilla Encounter (1985), the temporary Koala Exhibit (1986), Lions Pride (1989), the Tropical Rainforest, and Discovering Apes.

The zoo lost its accreditation with the Association of Zoos and Aquariums in 2001, due to mismanagement, poor conditions for some of the animals being exhibited, and the deaths of several animals. In 2003, after a major overhaul of the zoo and the addition of several new exhibits, the Topeka Zoo regained its accreditation.

In 2011, the City hired a new zoo director by the name of Brendan Wiley. After this hire, the general demeanor of the citizens toward the zoo has been more positive.

Hill's Black Bear Woods was built in 1997, and features animals from North America. Units house Virginia opossum, Harris hawk, and red-tailed hawk. bald and golden eagles live in tall flight pens. A coyote inhabits a densely planted exhibit while pronghorns have an exhibit nearby. Four black bears live in a spacious enclosure with trees to climb. They can be viewed from an elevated walkway, or a ground level window.

Waterbird Lagoon features three ponds. Waterfowl such as trumpeter swans live in these ponds. Many wild waterfowl visit these ponds such as mallard ducks, wood ducks, and herons.

The Jungle Cats exhibit features rare Sumatran tigers in thickly planted, side-by-side exhibits (one was previously home to a black leopard). Both yards have water features. 3 Sumatran tigers cubs were born in May 2014.

The Animals and Man building features exhibits for small animals, such as black-and-white ruffed lemurs and African crested porcupines. This building also serves as the indoor house for the zoo's hippopotamus, African and Asian elephants, and giraffe. They all have large outdoor yards, and the giraffes share theirs with East African crowned cranes.

Formerly Lion's Pride, this exhibit has three lions in a spacious exhibit, painted dogs in an adjoining yard, and Patas monkeys in an exhibit spanning the entrance to Camp Cowabunga, mixed with Kirk's dik-dik, leopard tortoises, and guineafowl. Nearby is an exhibit for ostriches. The main feature is a central plaza where guests can view various artefacts from Africa, sit in a canoe used in the Zambezi, and view the animals from safari tents. In the future, this area will feature a viewing area into a new exhibit for African elephants.

In the Lianas Forest (formerly Discovering Apes) building, orangutans live behind glass in an enclosure replicating the treetops in Borneo. They also have a spacious outdoor yard, meant to emulate Camp Leakey. The Treetop Conservation Center is now part of the building. A tunnel leads visitors through an outdoor enclosure which now houses sun bears that once housed gorillas.

Adventure Trail was added in 2015 and includes many family friendly experiences. The Rainbow lorikeet aviary houses several colorful lorikeets that you can feed for a fee. A playground includes many climbing structures, a place to ride tricycles, and a mining sluice. The general store in this area also serves as a point to purchase snacks and refreshments.

All content from Kiddle encyclopedia articles (including the article images and facts) can be freely used under Attribution-ShareAlike license, unless stated otherwise. Cite this article:
Topeka Zoo Facts for Kids. Kiddle Encyclopedia.