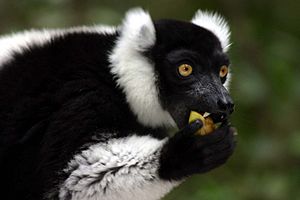 Together with the red ruffed lemur, the species is the largest extant member of the family Lemuridae, ranging in length from 100 to 120 cm (3.3 to 3.9 ft) and weighing between 3.1 and 4.1 kg (6.8 and 9.0 lb). The black-and-white ruffed lemur is always both black and white; the general color patterns do not usually vary. Abdomen, tail, hands and feet, inner limbs, forehead, face and crown are black. The fur is white on the sides, back, hind limbs and on the hindquarters. Males and females are alike.

The species inhabits the eastern rainforests of Madagascar. It occurs at low to moderate altitudes, in primary forests with tall and mature trees, and by preference deep inside contiguous blocks of vegetation, although patchy forests are made use of if necessary.

Wild black-and-white ruffed lemurs have a highly frugiviorous diet, with fruit making up 92% of their overall diet. Smaller percentages of leaves, nectar, seeds, and even fungi make up the remainder. Their diet is also influenced by the seasons, with certain plant parts and fruits only ripening or becoming available during certain times of the year. Water consumption also varies throughout the year and can be influenced by diet. The number of tree species utilized by for food by the lemurs can range from 19-40 species depending on location. The larger part of fruit items in the diet is provided by four taxa of fruit trees: Ravensara species, Chrysophyllum boivinianum, Protorhus species, and Harungana madagascariensis.

Studies show that most of their feeding time is spent on basic fruit which consumes around 80% of that time. The rest of which is spent mostly on nectar and various other forage. In general most male black and white ruffed lemurs will eat less than a female will during the hot dry seasons of Madagascar. Another difference between the diet of male and female ruffed lemurs is that when a female is pregnant and also lactating she will eat significantly more flowers and leaves than the male in order to supply her offspring and the high energy cost of reproduction. Studies recording ruffed lemurs in captivity and in the wild over the course of a year show that ruffed lemurs on an average spend around 28% of their time feeding, 53% resting, and the last 19% socializing and moving about.

Black-and-white ruffed lemurs demonstrate the rare behavior of female social dominance both within and outside the context of feedings. This is also found in other ruffed lemurs as well as in ring-tailed lemurs. Aggressive interactions between males and females are usually won by the female even when they do not show aggressive behavior towards the male. Unlike other species of lemurs, black-and-white ruffed lemur females occasionally show submission and more aggression needs to be maintained in order for the female to win the interaction instead of having an undecided interaction. Male aggression does not vary among seasons.

One of the main reasons that black-and-white ruffed lemurs exhibit dominance is for feeding purpose; that is they are able to establish priority over males in feeding. Reproductive females need more access to food because of the costs of carrying and caring for offspring which is why they establish this feeding priority. Energy demands in this species are particularly high. Female dominance in feeding is maintained through demonstrating some aggressive behavior and leading the group to food in order to have first access to the food. Dominance is not thought to be established in younger females so groups lacking a mature female may not have a dominant female. When a dominant female is present, she leads the group to the food source and eats more than the rest of the group.

The black-and-white ruffed lemur demonstrates several different call types each of which last several seconds. Most lemurs of a group participate in any one chorus. These lemurs are particularly known for their loud roar/shriek choruses which have several purposes including group movement, spacing among different groups, and alarming other members of the group of predators. Unlike the calls of other species, the calls of the black-and-white ruffed lemur are not likely to be for the establishment of territory for a group. The calling behavior is participated in throughout the course of a day, not concentrated at any one point of the day; however calls are usually not heard at night.

All content from Kiddle encyclopedia articles (including the article images and facts) can be freely used under Attribution-ShareAlike license, unless stated otherwise. Cite this article:
Black-and-white ruffed lemur Facts for Kids. Kiddle Encyclopedia.