Greensburg is a city in and the county seat of Westmoreland County, Pennsylvania, United States, and a part of the Pittsburgh Metro Area. The city lies within the Laurel Highlands and the ecoregion of the Western Allegheny Plateau. The city is named after Nathanael Greene, a major general of the Continental Army in the American Revolutionary War. The population was 14,892 at the 2010 census.

Located 30 miles southeast of Pittsburgh, Greensburg is a major business, academic, tourism and cultural center in Western Pennsylvania. It is evident as the city's population doubles during work hours. The city ranks seventh in Pennsylvania in daytime growth, behind Pittsburgh, Philadelphia, Harrisburg, King of Prussia, Lancaster, and State College. It also ranks 16th in the United States for daytime growth among towns with a resident population between 15,000 and 24,999. In 2007, Greensburg was ranked as one of the "Best Places to Retire" in Pennsylvania by U.S. News & World Report.

After the end of the Revolutionary War, an inn was built along a wagon trail that stretched from Philadelphia west over the Appalachian Mountains to Fort Pitt, now the city of Pittsburgh. A tiny settlement known as Newtown grew around the inn, today the center of Greensburg's Business District at the intersection of Pittsburgh and Main Streets. At Pittsburgh, the wagon trail became Penn Avenue.

In 1782, a raid by Guyasuta-led Seneca Indians accompanied by Canadian rangers burned Hannastown, the original Westmoreland County seat, north of Greensburg, and the first county seat west of the Allegheny Mountains. Newtown became the new county seat in 1785. In 1786, the county built a log courthouse on land purchased from two residents, Christopher Truby and William Jack. The Westmoreland County Courthouse, in its various incarnations, has stood on this site. The area surrounding the courthouse became the original borough of Greensburg, named for American Revolutionary War General Nathanael Greene, and formally incorporated as a borough in 1799.

In the early 19th century, Greensburg had very little growth. After 1850, Greensburg became a growing county seat with inns and small businesses. It was a railroad stop and the discovery of large areas of soft coal nearby made it the center of a vigorous mining industry in the late 19th century and early 20th century.

The opening of Greengate Mall and Westmoreland Mall in 1965 and 1977, respectively, marked a new era for retail shopping in the area, but negatively impacted retail businesses in Downtown Greensburg's shopping district. Changes in local shopping habits had already taken its toll by the late 1970s when Troutman's Department Store closed. By the mid-1990s, city officials shifted its revitalization plans on the cultural aspects of Downtown Greensburg, such as the restorations of the Palace Theater and the historic Train Station, as well as a new, recently opened performing arts center for Seton Hill University. Also, in July 2009, Lake Erie College of Osteopathic Medicine, the largest medical school in the country, opened a satellite campus at Seton Hill University. Now over 200 students study at LECOM at Seton Hill every year. As part of this ongoing transition, an expansion of the Westmoreland Museum of American Art was completed in 2015. 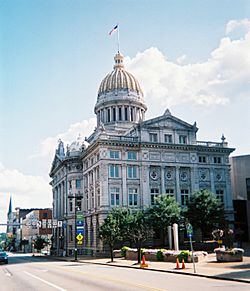 The city is home of the Roman Catholic Diocese of Greensburg.

The city of Greensburg is currently composed of eight wards, most of which were formerly boroughs and are divided into several neighborhoods. Bunker Hill, now Fifth Ward, was merged into Greensburg in 1894. The name originated because of fights at the rowdy Bushfield Tavern in the early 1840s to mid-19th century that were compared to the Battle of Bunker Hill.

Eighth Ward was originally home to many Italian immigrants from Cercemaggiore, Italy. Today, the original Our Lady of Grace church, built by the masons from Italy, still stands although used as a residence. The Hilltop Social Club, founded by a few families who lived in the areas of Bierer, Margaret, White and Catherine Streets is also located here. Every year it has become a tradition for the firehall in the Eighth Ward to throw a carnival which includes bingo, amusement rides, and of course the famous Shuey Burgers. 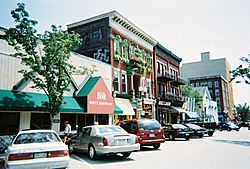 There were 7,144 households out of which 24.1% had children under the age of 18 living with them, 39.3% were married couples living together, 12.8% had a female householder with no husband present, and 45.1% were non-families. 39.2% of all households were made up of individuals and 15.4% had someone living alone who was 65 years of age or older. The average household size was 2.11 and the average family size was 2.85. 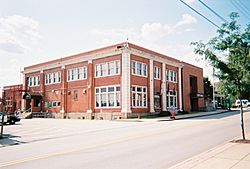 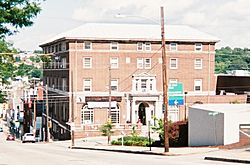 Greensburg is a major cultural center in Western Pennsylvania. It is the home of the Westmoreland Museum of American Art, which specializes in American Art circa 1750–1950. The Palace Theatre, in the heart of the city's emerging cultural district, is the site for various performances throughout the year. Additionally, it is the home of the Westmoreland Symphony Orchestra, and the Summer Sounds Concert Series at the Robertshaw Amphitheater in St. Clair Park.

The Westmoreland Cultural Trust has played a major role in the revitalization of Downtown Greensburg in recent years. Its accomplishments include the ongoing renovation of the Palace Theatre and the restoration (Before/After Pictures) of the circa 1910 Train Station. They are also responsible for renovating several commercial buildings in the downtown area.

Stage Right! also contributes to the culture of the region, offering classes in musical theatre for young people and staging professional productions at the Palace Theater and Greensburg Garden and Civic Center.

Greensburg Civic Theatre, one of the few long-established volunteer-based community theatre organizations in Westmoreland County, has been presenting both adult and children's theater productions for over 60 years. Founded in 1951, they are the resident theatre company at the Greensburg Garden and Civic Center.

The Performance Arts Center of Seton Hill University opened its doors to the public in September 2009. This multimillion-dollar complex, located in the city's Cultural District, is expected to serve as an additional catalyst for the future growth of the downtown core.

Since Greensburg is overshadowed by nearby Pittsburgh, radio and television stations are mostly based out of the larger city. On a much lesser scale, some Johnstown-area media outlets are also available in parts of Greensburg. The following information is about media based exclusively in Greensburg. 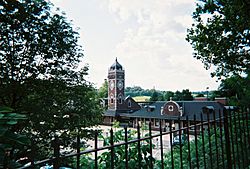 The east-west U.S Route 30 expressway bypasses Greensburg to the south, as does the north-south Pennsylvania Turnpike 66 to the west. A proposed highway called the Laurel Valley Expressway was initially planned to be built to the east of Greensburg, primarily in Unity, Derry, and Mount Pleasant townships, but that project has never materialized. The Pennsylvania Turnpike's New Stanton exit is about six miles (9 km) south of Greensburg on U.S. Route 119 where Interstate 70 splits from Interstate 76. The Turnpike's Irwin exit is located about seven miles west of the city on U.S. route 30. PA Routes 66 and 136 begin in Greensburg. PA Routes 130, 819 and U.S. Route 119 pass through the city. U.S. Route 22, a major connector from Central to Southwestern Pennsylvania runs approximately seven miles north of the city through Salem Township, accessible by routes 66, 819, and 119.

Westmoreland Transit is the mass transit system of Greensburg and Westmoreland County and operates a network of bus routes seven days a week throughout the city and the rest of the county, as well as Pittsburgh. Greyhound Lines runs regular scheduled bus service to and from Greensburg from many hubs, including Pittsburgh, Chicago, and New York City.

Air service is available at the Pittsburgh International Airport and at the Arnold Palmer Regional Airport east of Greensburg in nearby Latrobe.

The city has Amtrak rail service at the restored Train Station, as well as freight rail operator Norfolk Southern and an independent shortline railroad connecting coal mines and businesses located south of the city to the Norfolk Southern line just west of Greensburg.

Greensburg is bike-friendly as it offers the Five Star Trail, which begins at Lynch Field and ends south of the city in Armbrust. It will eventually connect to the north section of the Youghiogheny River Trail, which is a part of the Great Allegheny Passage.

All content from Kiddle encyclopedia articles (including the article images and facts) can be freely used under Attribution-ShareAlike license, unless stated otherwise. Cite this article:
Greensburg, Pennsylvania Facts for Kids. Kiddle Encyclopedia.