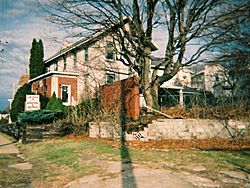 The borough's oldest structure:
The Rugh House at 1213 Broad Street

South Greensburg is a borough in Westmoreland County, Pennsylvania, United States. The population was 2,117 at the 2010 census.

In 1780, Michael Rugh acquired title to 229.25 acres (0.9277 km2), which he operated as a farm. The land was passed on to his son, Jacob Rugh, and later to Jacob's son, Peter Rugh. The Rugh family house is still extant at 1213 Broad Street. The current building dates from the Civil War, but was built on the foundation of a much older structure. The area was known as Rughtown, although it was not yet a town in any meaningful sense.

In the 1870s, a local industrialist, George Franklin Huff, bought 189 acres (0.76 km2) of the Rugh farm. In 1881, this was sold to Greensburg Coal and Coke Company (later Keystone Coal and Coke Company), which established a mine and brickyard along Broad Street. Fifty workers' houses were built in 1888. During this time, the community was known as Huff, Hufftown, or, Pennsylvania Huff's Station.

A trolley line was constructed in 1890 along Broad Street, running north into Greensburg. This line was later acquired by West Penn Railways, which operated trolley service until 1952.

In 1891, the community was incorporated as the Borough of South Greensburg.

The borough was the scene of violence during the Westmoreland County Coal Strike of 1910–1911. In July 1910, a group of striking coal miners were authorized to conduct a protest by the borough's Chief of Police, William B. Keltz. A confrontation ensued between the marchers and security personnel working for Jamison Coal and Coke Company. In the resulting melee, one miner, Peter Gale, was shot by J.A. Willis, who was a member of the company's security forces. Chief Keltz attempted to arrest the shooter and instead was arrested himself by constables under Jamison's control.

For nearly a century, South Greensburg's largest employer was Walworth Valves. This factory began in 1888, as the Kelly & Jones Company (John T. Kelly and George M. Jones), and Huff was a member of their board of directors. Walworth Company purchased the facility in 1925. The factory filled a large plot of land bordered by (using current street names) Route 30 Bypass, South Main Street, Huff Avenue, and the railroad. Including adjacent properties used by the company, this industrial complex covered 31 acres (0.13 km2) and had 1500 employees at its height. The factory closed in 1980 and was later demolished. The site is now occupied by the Wellington Square office building and various commercial businesses.

According to the United States Census Bureau, the borough has a total area of 0.7 square miles (1.9 km²), all of it land.

All content from Kiddle encyclopedia articles (including the article images and facts) can be freely used under Attribution-ShareAlike license, unless stated otherwise. Cite this article:
South Greensburg, Pennsylvania Facts for Kids. Kiddle Encyclopedia.