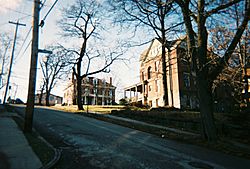 The southern portion of Academy Hill is largely institutional in character, including the Blessed Sacrament Cathedral, its parish school, and Greensburg's public high school, now used as a middle school. Since 1810 the block bounded by Main Street, Academy Hill Place, Maple Avenue, and Grant Street has been used for a succession of public schools, and the 1810 school at this site was the source of the neighborhood's name.

Main Street, north of these landmark structures, is lined with large houses and mansions built for the city's elite, some of them designed by Paul Bartholomew. As one moves to the east from Main Street, the houses become less elaborate. The north-south streets east of Maple Avenue are lined with relatively modest houses that represent middle-class and working-class residential architecture in the pre-World War II era.

All content from Kiddle encyclopedia articles (including the article images and facts) can be freely used under Attribution-ShareAlike license, unless stated otherwise. Cite this article:
Academy Hill Historic District (Greensburg, Pennsylvania) Facts for Kids. Kiddle Encyclopedia.