New Kensington, known locally as New Ken, is a city in Westmoreland County in the U.S. state of Pennsylvania, situated along the Allegheny River 18 miles (29 km) northeast of Pittsburgh. The population was 13,116 at the 2010 Census.

Like much of Westmoreland County and surrounding areas, the region was a hunting ground for Native Americans of the Six Nations European-American settlement began in the mid-1700s. Continental army troops built Fort Crawford, near the mouth of Pucketa Creek, in 1777. The fort was abandoned in 1793.

Originally part of Burrell (and later Lower Burrell) Township, the city of New Kensington was founded in 1891. In 1890, the Burrell Improvement Company considered the advantages of the level land south of its home in Lower Burrell, and deemed it a prime location for a city and named the area "Kensington" (later changed to "New Kensington" for postal purposes, because Pennsylvania already had another city with that name). In an attempt to make New Kensington comparable to Pittsburgh, the streets were named with numbers. Avenues ran parallel to the river, while streets were perpendicular. The main commercial streets were 4th and 5th avenues.

Once the land was surveyed, a public sale was held on June 10, 1891. Thousands of people flooded the area and investors began bringing industry with them. The first large company was the Pittsburgh Reduction Company, which later became Alcoa. They acquired a 3.5-acre (14,000 m2) property that allowed the company to utilize the riverfront. The Alcoa facility remained operational until the 1960s. 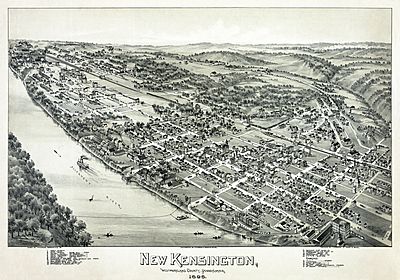 New Kensington in 1896, seen in a lithograph by Thaddeus Mortimer Fowler

Eventually, other companies such as Adams Drilling, Goldsmith and Lowerburg, New Kensington Milling, New Kensington Brewing, Logan Lumber, Keystone Dairy, and many more were built late in the 19th century and continuing into the early 20th century. Early achievements included a railroad station, the 9th Street bridge, a passenger boat that navigated the Allegheny River, a street car line that ran to Natrona via the West Penn Railways, the Kensington Dispatch newspaper, a fire department, hotel, opera house, and a local chapter of the YMCA. New Kensington annexed the independent borough of Parnassus in 1939. 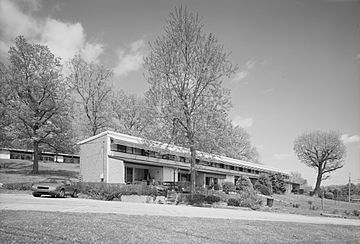 In 1941, New Kensington became the site of a modern workers' housing project—named the Aluminum City Terrace—designed by Marcel Breuer and Walter Gropius, which set new standards for federal housing design. Breuer and Gropius ascribed to the famous Bauhaus School of Design in Germany. Intended for Alcoa defense workers, it was subsequently used to rehouse displaced residents from other parts of the city. In 1948, tenants from the Terrace decided to purchase the housing project from the U.S. government to form a co-op, managed by a Board of Directors, elected by representatives from the 250 units. Relatively low-cost monthly fees continue to cover the costs of running the Terrace.

New Kensington is featured in P.O.D.'s "Youth of the Nation" music video. The PA 56 Arnold directional sign is visible as the car in the video travels eastbound over the 9th Street Bridge (C.L. Schmitt Bridge).

The city was also one of the filming locations for the movie Dogma, starring Ben Affleck and Matt Damon.

A branch campus of Pennsylvania State University was established in New Kensington in 1958. Since 1966, it has been located in suburban Upper Burrell Township, but retains the name Penn State New Kensington. In 2008, a satellite campus of Westmoreland County Community College opened in downtown New Kensington. 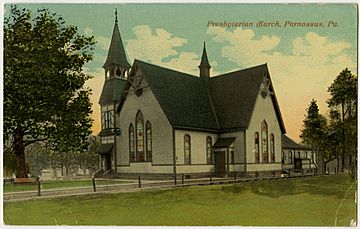 There are over thirty churches representing several denominations throughout the city.

Two radio stations, WMNY and WBZZ, are both licensed to New Kensington, and serve the Pittsburgh radio media market.

Since the 1970s, the city's downtown has been plagued by high vacancy rates. Starting in 2008, the New Kensington Redevelopment Authority moved to condemn and demolish abandoned commercial and residential properties. The city has also instituted a Weed and Seed urban renewal program, and provided tax abatement to businesses located or opened in designated Keystone Opportunity Zones.

All content from Kiddle encyclopedia articles (including the article images and facts) can be freely used under Attribution-ShareAlike license, unless stated otherwise. Cite this article:
New Kensington, Pennsylvania Facts for Kids. Kiddle Encyclopedia.