George Frederick Blanda (September 17, 1927 – September 27, 2010) was an American football quarterback and placekicker who played professionally in the American Football League (AFL) and National Football League (NFL). Blanda played 26 seasons of professional football, the most in the sport's history, and had scored more points than anyone in history at the time of his retirement.

Blanda retired from pro football in August 1976 as the oldest player to ever play at the age of 48. The only player to play in four different decades, he holds the record for most extra points made (943) and attempted (959). During his career, he played under head coaches Bear Bryant, George Halas, Clem Crowe, Lou Rymkus, Wally Lemm, Pop Ivy, Sammy Baugh, Hugh Taylor and John Madden.

Blanda was a quarterback and kicker at Kentucky from 1945-1948. Coach Paul "Bear" Bryant, who later won fame and set countless records at Southeastern Conference rival Alabama, arrived in his sophomore year, following a 1–9 season in 1945. The Wildcats only lost three games in each of the next three years.

Blanda was signed by the Chicago Bears for $600 in 1949, an amount owner George Halas demanded back when he made the team, as Blanda was given a lucrative contract for much more money. While primarily used as a quarterback and placekicker, Blanda also saw time on the defensive side of the ball at linebacker. It was not until 1953 that Blanda emerged as the Bears' top quarterback, but an injury the following year effectively ended his first-string status. For the next four years, he was used mostly in a kicking capacity. Later commenting on his testy relationship with Halas, Blanda noted, "he was too cheap to even buy me a kicking shoe." Blanda later reflected that by the 1950s the pro game had moved beyond Halas, who seemed to lack the interest he had earlier. 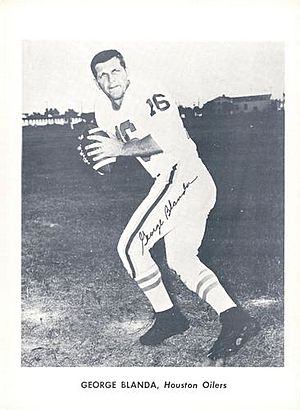 Blanda with the Oilers in 1961

Blanda retired after the 1958 season because of Halas' insistence on only using him as a kicker, but returned in 1960 upon the formation of the American Football League. He signed with the Houston Oilers as both a quarterback and kicker. He was derided by the sports media as an "NFL Reject", but he went on to lead the Oilers to the first two league titles in AFL history, and he was the All-AFL quarterback and won AFL Player of the Year honors in 1961. During that season, he led the AFL in passing yards (3,330) and touchdown passes (36). His 36 touchdown passes in 1961 were the most ever thrown by any NFL/AFL quarterback in a single season, until matched by Y. A. Tittle of the NFL New York Giants two years later in 1963. Blanda's and Tittle's mark remained the record until surpassed by Dan Marino's 48 touchdown passes in 1984. Blanda's 42 interceptions thrown in 1962 is a record that still stands.

During 1962, he had two 400-yard passing days for the Oilers: a 464-yard effort against the Buffalo Bills on October 29, with four touchdown passes (winning 28–16); and 418 yards three weeks later against the Titans of New York, this time with seven touchdown passes in a 49–13 victory. Blanda passed for 36 touchdowns that season. On 13 occasions, he connected on four or more touchdown passes during a game, and on November 1, 1964, unleashed 68 passes for Houston against the eventual champion Buffalo Bills.

From 1963 to 1965, Blanda led the AFL in passing attempts and completions, and ranked in the top ten for attempts, completions, yards and touchdowns during seven consecutive seasons. A four-time AFL All-Star, Blanda's already-long career seemed over when he was released by the Oilers on March 18, 1967. However, the Oakland Raiders signed him that July, seeing his potential as a contributing backup passer and a dependable kicker.

In later years, Blanda remained a strong supporter of AFL heritage, saying: "That first year, the Houston Oilers or Los Angeles Chargers (24–16 losers to the Oilers in the title game) could have beaten the NFL champion (Philadelphia) in a Super Bowl." Blanda said further: "I think the AFL was capable of beating the NFL in a Super Bowl game as far back as 1960 or '61. I just regret we didn't get the chance to prove it."

In 1967, Blanda's first season with the Raiders, his kicking skills helped him lead the AFL in scoring with 116 points. In two instances, his leg helped play a role in Raider victories: a trio of field goals helped upset the defending league champion Kansas City Chiefs on October 1; in the closing weeks of the regular season, Blanda booted four field goals behind a hostile Houston crowd in a 19–7 victory over his former team, the Oilers, helping gain a measure of revenge. Three weeks later, the Raiders met the Oilers again in the AFL Championship Game and won 40–7.

The Raiders went on to compete in Super Bowl II, but lost the final two AFL Championship games in the ten-year history of the league.

In 1970, Blanda was released during the exhibition season, but bounced back to establish his 21st professional season. During that season, Blanda, at age 43, had a remarkable five-game run. Against the Steelers, Blanda threw for three touchdowns in relief of an injured Daryle Lamonica. One week later, his 48-yard field goal with three seconds remaining salvaged a 17–17 tie with the Kansas City Chiefs. On November 8, he again came off the bench to throw a touchdown pass to tie the Cleveland Browns with 1:34 remaining, then kicked a 53-yard field goal with 0:03 left for the 23–20 win. Immediately after the winning field goal, Raiders radio announcer Bill King excitedly declared, "George Blanda has just been elected King of the World!" In the team's next game, Blanda replaced Lamonica in the fourth quarter and connected with Fred Biletnikoff on a touchdown pass with 2:28 left in the game to defeat the Denver Broncos, 24–19. The following week, Blanda's 16-yard field goal in the closing seconds defeated the San Diego Chargers, 20–17.

In the AFC title game against the Baltimore Colts, Blanda again relieved an injured Lamonica, completing 17 of 32 passes for 217 yards and 2 touchdowns while also kicking a 48-yard field goal and two extra points, keeping the Raiders in the game until the final quarter, when he was intercepted twice. Aged 43, he became the oldest quarterback ever to play in a championship game, and was one of the few remaining straight-ahead kickers in the NFL.

Blanda's achievements resulted in his winning the Bert Bell Award. Chiefs' owner Lamar Hunt said, "Why, this George Blanda is as good as his father, who used to play for Houston." Although he never again played a major role at quarterback, Blanda served as the Raiders' kicker for five more seasons. Blanda was also named the Associated Press Male Athlete of the Year, being the first-ever professional football player to earn the award.

He played in his last game at Pittsburgh's Three Rivers Stadium on January 4, 1976, at age 48, in the 1975 AFC Championship Game, in which he kicked a 41-yard field goal and made one extra point as the Raiders lost to the Steelers 16–10. He was released during training camp in late August 1976, succeeded at kicker by rookie Fred Steinfort, but pulled for the team as the Raiders went on to win the NFL title that season in Super Bowl XI. (Steinfort was injured in mid-season, and was replaced by 35-year-old veteran Errol Mann.)

He is the placekicker on the All-Time All-AFL Team, and was one of only 20 players to play all ten years of the AFL, as well as one of only three who were in every AFL game their teams played. Blanda was elected to the Pro Football Hall of Fame in 1981, his first year of eligibility, and also was inducted into the University of Kentucky Hall of Fame.

Blanda broke Lou Groza's career scoring record in 1971, a record he held until 2000 when it was broken by Gary Anderson. Blanda's 2,002 total points are still good for 7th on the all-time scoring list.

In 1999, Blanda was ranked number 98 on The Sporting News' list of the 100 Greatest Football Players.

Blanda was the first-ever recorded fantasy football draft pick when the game was first created in 1962 by The Greater Oakland Professional Pigskin Prognosticators League.

Blanda was the son of a Slovak-born Pittsburgh-area coal miner. He was married to Betty Harris from December 17, 1949, until his death on September 27, 2010, ten days after his 83rd birthday. They had two children. Harris-Blanda survives him, besides the children.

According to the Pro Football Hall of Fame, Blanda died after a "short illness" on September 27, 2010. He was 83 years old. A moment of silence was held in Blanda's honor prior to the start of the September 27, 2010, game between the Green Bay Packers and the Chicago Bears on Monday Night Football, from Soldier Field.

The 1970s TV series Happy Days was set in 1950s Milwaukee, Wisconsin. In the Season 3 episode "Football Frolics", first aired January 20, 1976, Richie Cunningham (played by Ron Howard) and Ralph Malph (Donny Most) are watching the December 9, 1956, Chicago Bears – Chicago Cardinals televised game. After Ed Brown's pass to Harlon Hill is intercepted by the Cardinals, Richie wants "the other quarterback" put in. Ralph says that the other quarterback is "washed up. He's old. He's 30. He's got no future." Richie argues back, "George Blanda has two or three good years left." The joke was that Blanda, 19 years after the date depicted in the show, was still playing.

All content from Kiddle encyclopedia articles (including the article images and facts) can be freely used under Attribution-ShareAlike license, unless stated otherwise. Cite this article:
George Blanda Facts for Kids. Kiddle Encyclopedia.