Mount Pleasant is a borough in Westmoreland County, Pennsylvania, United States. It stands 45 miles (72 km) southeast of Pittsburgh. As of the 2010 census, the borough's population was 4,454.

In the past, Mount Pleasant was a center of an extensive coke-making industry. Other products included flour, lumber, iron, glass, foundry products, etc.

The year of Mount Pleasant's first non-Indian resident is not known, although one source states that at the time of the American Revolutionary War, there was a settlement of "not more than a half dozen houses." Braddock Road (Braddock expedition) passed through the western end of the future town in 1755, opening the area to settlement. In 1793 Michael Smith was licensed to operate an inn, which would have served traffic on Glades Road (sometimes spelled Glade Road), now Route 31. In 1797, Nathaniel Marshall sold land to Andrew McCready, who laid out the design of the town.

Jacob's Creek Bridge, the first iron-chain suspension bridge built in the United States, was erected south of the town in 1801. It was demolished in 1833.

Unfortunately, no pre-1800 structures remain within the borough limits. The borough’s three oldest existing buildings all date from approximately 1812: The Shupe House at 201 Main Street, Hitchman House at 355 Main Street, and the Rupert Building at 642-644 Main Street.

Glass manufacturing was a foundation of the local economy, with Bryce Brothers commencing operations in 1850, and L. E. Smith Glass in 1907. The invention of the Bessemer process of steelmaking in 1859, which required coke (fuel), had a dramatic impact on the region. The town prospered as coal deposits were developed, from which coke was made. However, the lives of coal miners in the outlying "patch towns" (company-owned mining towns) were arduous, and labor-management disputes became frequent. The strike in Morewood, west of Mount Pleasant borough, was the most violent of the area’s strikes, in which nine miners were killed by sheriff’s deputies on April 3, 1891. 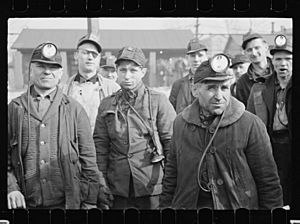 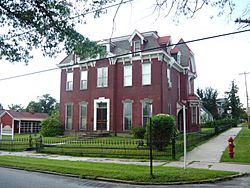 Mount Pleasant was disadvantaged when the main lines of the railroads bypassed the community in the 1850s. The community’s isolation lessened in 1871 with the opening of the Mount Pleasant and Broadford Railroad, later part of the Baltimore and Ohio Railroad. In addition, a branch line of the Pennsylvania Railroad connected the borough to Scottdale, and West Penn Railways (an interurban trolley) served Mount Pleasant from 1906 to 1952.

The Borough of Mount Pleasant has three listings on the National Register of Historic Places: the Samuel Warden House (1886) at 200 South Church Street, the demolished Mount Pleasant Armory, and the Mount Pleasant Historic District, which encompasses the oldest parts of the borough.

According to the United States Census Bureau, the borough has a total area of 1.1 square miles (3.0 km²), all of it land.

A large proportion of the residents are of Polish descent, as evidenced by the Tadeusz Kościuszko Club. 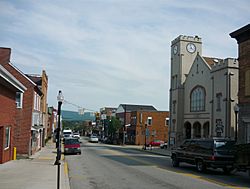 The borough is featured as a location in the PlayStation 3 video game Resistance 3.

All content from Kiddle encyclopedia articles (including the article images and facts) can be freely used under Attribution-ShareAlike license, unless stated otherwise. Cite this article:
Mount Pleasant, Pennsylvania Facts for Kids. Kiddle Encyclopedia.