Butler County is located in the western part of the U.S. state of Pennsylvania. As of the 2020 census, the population was 193,763. Its county seat is Butler. Butler County was created on March 12, 1800, from part of Allegheny County and named in honor of General Richard Butler, a hero of the American Revolution.

Some famous inventions and discoveries were made in Butler County. It was in Saxonburg that the designer of the Brooklyn Bridge, John Roebling, invented his revolutionary "wire rope." At what is now known as Oil Creek, Butler County resident William Smith and Edwin Drake first proved oil could be tapped from underground for consistent supply. The Jeep was developed in Butler County by American Bantam in 1941.

Famous politicians have lived in and traveled through Butler County. George Washington passed through during the French and Indian War. Butler's only U.S. Senator, Walter Lowrie, built a home in 1828 that still stands behind the Butler County Courthouse. The Butler County Historical Society's office is in this home.

Butler's highest ranked federal official ever is William J. Perry, Secretary of Defense under President Bill Clinton from 1994-1997. He graduated from Butler High School in 1945. In 1923, President Warren G. Harding's funeral train passed through Butler County on its way back to Washington D.C. John F. Kennedy spoke in front of the Butler County Courthouse during the United States presidential election, 1960. Hubert Humphrey also spoke in Butler during this time period. Then in 2004, Vice President Dick Cheney delivered a speech in Saxonburg to rally support for President George W. Bush during the United States presidential election, 2004.

Bret Michaels, lead singer of the rock band Poison was born here in 1963.

It is the location of Moraine State Park, with the 3,000-acre (12 km2) glacial lake, Lake Arthur. Lake Arthur is used for fishing and sailing, and the surrounding park is used for hiking and hunting.

There are 2 Pennsylvania state parks in Butler County.

The glacier created a landscape of rolling hills topped with hardwood trees and swamps in the valley bottoms. Moraines containing gravel, sand and clay were draped upon the landscape and silt was left on the extinct lake bottoms. Reference to: http://www.dcnr.state.pa.us/stateParks/parks/moraine/moraine_history.aspx 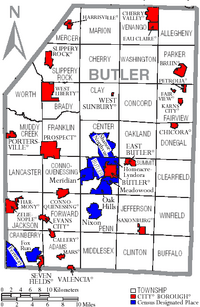 Under Pennsylvania law, there are four types of incorporated municipalities: cities, boroughs, townships, and, in at most two cases, towns. The following cities, boroughs and townships are located in Butler County:

Several of these communities, most notably Renfrew, Lyndora, Herman, Sarver, Cabot, Boyers, and Forestville, have post offices and zip codes, but aren't officially incorporated under Pennsylvania law, and exist entirely within townships.

The population ranking of the following table is based on the 2010 census of Butler County.

Butler County has often been used as a setting for films shot in the North Pittsburgh area. Such films include:

Films set in Butler County, but not necessarily filmed there. 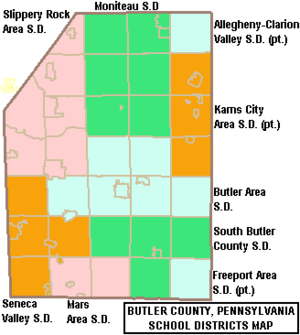 The Butler County Federated Library System (additionally known as the Library System of Butler County) includes the ten listed libraries. Each library is managed by its own Board of Directors. The majority of the funding for these libraries comes from state grants, user fines and donations with additional financial contributions from Butler County. The first Butler library originated in 1894 with the Literary Society of Butler in what is now known as the Little Red Schoolhouse. The Butler Area Public Library, built in 1921, was the last Carnegie library built in Pennsylvania. In the intervening 27 years the library was independently operated. From 1921 to 1941 the library quadrupled the number of patrons served. In 1987 the County Commissioners, through a resolution, founded the Butler County Federated Library System.

All content from Kiddle encyclopedia articles (including the article images and facts) can be freely used under Attribution-ShareAlike license, unless stated otherwise. Cite this article:
Butler County, Pennsylvania Facts for Kids. Kiddle Encyclopedia.