Saxonburg is a borough in Butler County, Pennsylvania in the United States. It is part of the Pittsburgh metropolitan area in the western part of the state. It was founded in 1832 by F. Carl Roebling and his younger brother John A. Roebling as a German farming colony. The population of Saxonburg was 1,525 as of the 2010 census.

The city was first named "Germania" and "Sachsenburg" before its name was anglicized to the present one. After Roebling returned to his engineering career, he developed his innovation of wire rope in a workshop here. He became known for his design of suspension bridges, including the most famous one, the Brooklyn Bridge in New York.

Founded in 1832 by John A. Roebling, who is known for the design of the Brooklyn Bridge in New York and for innovation in producing wire rope, the community was initially called "Germania", which was soon changed to "Sachsenburg" and eventually anglicized to Saxonburg. Roebling had set out with his brother Karl and a group of pioneers from Germany in 1831 to flee the general unrest and oppression in Europe. The two men, along with a handful of the people who accompanied them on the trans-Atlantic journey secured 1,582 acres (6.40 km2) of land on October 28, 1831, from Mrs. Sarah Collins.

In 1946, Fred Seitz, then head of the physics department at Carnegie Tech, brought Ed Creutz, Jack Fox, Roger Sutton and Bert Corben to Carnegie Tech to establish an important nuclear physics research program. By June 6, 1946, a leading-edge 450 MeV proton synchrocyclotron was built at the Nuclear Research Center near Saxonburg, just south of the Saxonburg limits. The research program there flourished up to the mid-1970s when the then-obsolete accelerator was dismantled. The site was converted to industrial purposes, and is now occupied by II-VI Corporation. As of 1997, only one or two of the original Nuclear Research Center buildings remained, including the original laboratory building, more or less intact. 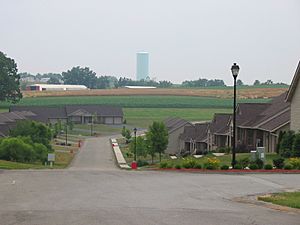 In November 2009, Jody Pflueger, Saxonburg's first Democratic and first female mayor, was elected as a write-in candidate, defeating the 12-year incumbent. While in office Mayor Pflueger had the position of Police Chief reinstated. Pflueger was succeeded by the late Pamela Bauman in 2013. William Gillespie held the office to complete her term until 2017.

According to the United States Census Bureau, Saxonburg has a total area of 0.89 square miles (2.3 km2), all of it land.

There were 655 households, out of which 22.7% had children under the age of 18 living with them, 47.8% were married couples living together, 10.4% had a female householder with no husband present, and 40.2% were non-families. 35.3% of all households were made up of individuals, and 17.3% had someone living alone who was 65 years of age or older. The average household size was 2.13 and the average family size was 2.75.

All content from Kiddle encyclopedia articles (including the article images and facts) can be freely used under Attribution-ShareAlike license, unless stated otherwise. Cite this article:
Saxonburg, Pennsylvania Facts for Kids. Kiddle Encyclopedia.