Butler is a city and the county seat of Butler County in the U.S. state of Pennsylvania. It is located 35 miles (56 km) north of Pittsburgh and part of the Pittsburgh metropolitan area. As of the 2010 census, the city population was 13,757. Butler was named the 7th best small town in America by Smithsonian magazine in May 2012. 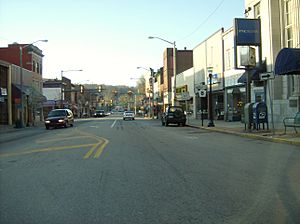 Butler was named for Maj. Gen. Richard Butler, who fell at the Battle of the Wabash, also known as St. Clair's Defeat, in western Ohio in 1791.

In 1803 John and Samuel Cunningham became the first settlers in the village of Butler. After settling in Butler, the two brothers laid out the community by drawing up plots of land for more incoming settlers. By 1817, the community was incorporated into a borough. The first settlers were of Irish or Scottish descent and were driving westward from Connecticut. In 1802 the German immigrants began arriving, with Detmar Basse settling in Jackson Township in 1802 and founding Zelienople the following year. After George Rapp arrived in 1805 and founded Harmony, larger numbers of settlers followed. John A. Roebling settled Saxonburg in 1832, by which time most of the county was filled with German settlers.

According to the United States Census Bureau, the city has a total area of 2.7 square miles (7.0 km2), all land.

The Connoquenessing Creek, which was ranked the second most polluted waterway in the U.S. in 2000, flows through the city.

Live plays are performed by local actors at the historic Butler Little Theatre, which has been running productions continuously since 1941. The Musical Theater Guild also produces an annual musical production. In 2012, Hobnob Theatre Company began producing several plays, including an annual production of Charles Dickens' A Christmas Carol.

A handful of local authors have written various novels and books on the surrounding area. Stewart O'Nan's prizewinning novel Snow Angels is set in Butler. The city was the setting for several scenes in Benjamin's Field, a fictional trilogy by local author J. J. Knights that was published in 2015.

Butler is home to the Butler County Symphony Association, which performs at the Butler Intermediate High School auditorium. There are also many art groups located in the city. They include the Associated Artists of Butler County and the Butler Arts Council. Several murals have been painted on exposed walls by local artists.

Butler Road Race, a 5-mile and 2-mile race held each summer in June, raises funds for local students in scholarships.

There are two airports located outside the city. Butler County Airport is used for general aviation, and can accommodate large aircraft such as corporate jets. Butler Farm Show Airport is used by pilots with smaller, private aircraft in the Butler area.

Butler is served by The Bus, run by the Butler Transit Authority.

Two railroads currently offer freight service in Butler. The Canadian National Railway-owned Bessemer and Lake Erie Railroad main line passes through the city, while the Buffalo and Pittsburgh Railroad provides regional service in the area. The B&P has a large locomotive shop located just outside the city limits.

Five major highways run through or near the city, providing links to other areas throughout western Pennsylvania. The south terminus of Pennsylvania Route 38 is just north of the city at U.S. Route 422. Route 422 skirts the city to the north on the Butler Bypass. PA 68 and PA 356 go straight through downtown, where they intersect with PA 8, Butler's Main Street when passing through the city.

All content from Kiddle encyclopedia articles (including the article images and facts) can be freely used under Attribution-ShareAlike license, unless stated otherwise. Cite this article:
Butler, Pennsylvania Facts for Kids. Kiddle Encyclopedia.