Kids Encyclopedia Facts
Not to be confused with Venango, Pennsylvania.

Venango County is a county located in the Commonwealth of Pennsylvania. As of the 2010 census, the population was 54,984. Its county seat is Franklin. The county was created in 1800 and later organized in 1805.

Venango County comprises the Oil City, PA Micropolitan Statistical Area. It is defined as part of the Pittsburgh media market.

Venango County was created on March 12, 1800 from parts of Allegheny and Lycoming Counties. The name "Venango" comes from the Native American name of the region, Onenge, meaning Otter. This was corrupted in English as the Venango River. The settlement at its mouth was likewise called Venango, and is the site of present-day South Side of Oil City, Pennsylvania.

Venango County was home to an oil boom in the years following discovery of natural oil (petroleum) in the mid-1850s.

George Bissell, a Yale University Chemistry professor, and Edwin L. Drake, a former railroad conductor, made the first successful use of a drilling rig on August 28, 1859 near Titusville, Pennsylvania. (Although Titusville is in Crawford County, the first oil well was drilled outside of town, less than a mile inside of the Venango County boundary.) This single well soon exceeded the entire cumulative oil output of Europe since the 1650s. Within weeks oil derricks were erected all over the area. Other oil boom towns located in Venango County included Franklin, Oil City, and the now defunct Pithole City. The principal product of the oil was kerosene. 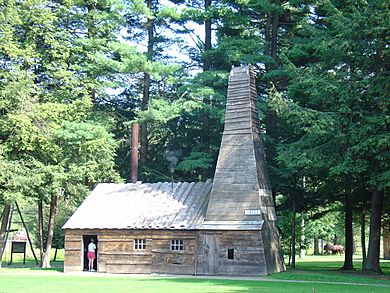 McClintocksville was a small community in Cornplanter Township in Venango County. In 1861, it was the location of Wamsutta Oil Refinery, the first business venture of Henry Huttleston Rogers, who became a leading United States capitalist, businessman, industrialist, financier, and philanthropist. Rogers and his young wife Abbie Palmer Gifford Rogers lived in a one-room shack there along Oil Creek for several years beginning in 1862. 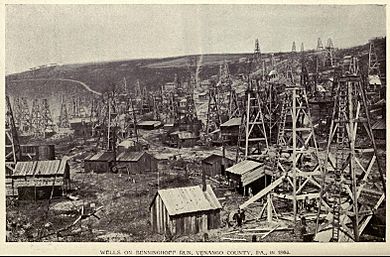 Wells along Benninghoff Run in 1866

Shortly later, Rogers met oil pioneer Charles Pratt who purchased the entire output of the tiny Wamsutta Oil Refinery. In 1867, Rogers joined Pratt in forming Charles Pratt and Company, which was purchased by Standard Oil in 1874. Rogers became one of the key men in John D. Rockefeller’s Standard Oil Trust.

After joining Standard Oil, Rogers invested heavily in various industries, including copper, steel, mining, and railways. The Virginian Railway is widely considered his final life's achievement. Rogers amassed a great fortune, estimated at over $100 million, and became one of the wealthiest men in the United States. He was also a generous philanthropist, providing many public works for his hometown of Fairhaven, Massachusetts, and financially assisting helping such notables as Mark Twain, Helen Keller, and Dr. Booker T. Washington.

Perhaps in one of history's ironies, another resident of Venango County about the same time as Henry and Abbie Rogers was a little girl named Ida M. Tarbell, whose father was an independent producer whose small business was ruined by the South Improvement Company scheme of 1871 and the conglomerate which became Standard Oil. Introduced to each other in 1902 by their mutual friend Mark Twain, Tarbell who had become an investigative journalist and Rogers, who knew of her work, shared meetings and information over a two-year period which led to her epoch work, The History of the Standard Oil Company, published in 1904, which many historians feel helped fuel public sentiment against the giant company and helped lead to the court-ordered break-up of it in 1911.

The oil heritage of Venanago County is remembered by a Pennsylvania State Park and many heritage sites which help tell the story and memorialize the people of the oil boom of the late 19th and early 20th centuries. 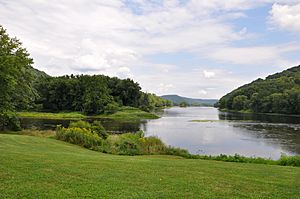 French Creek is formed near French Creek, New York and extends for a length of 117 miles (188 km) with a drainage area of 1,270 square miles (3,289 km²). It joins the Allegheny River near Franklin, Pennsylvania. The watershed area includes parts of Erie, Crawford, Venango, and Mercer Counties in Pennsylvania as well as Chautauqua County, New York. 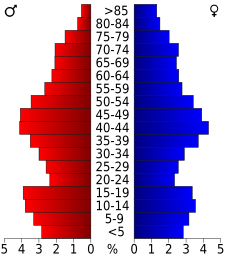 Age pyramid for Venango County based on census 2000 data 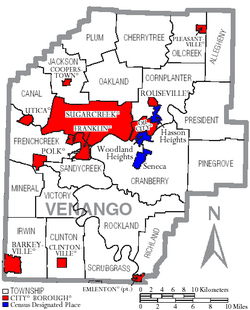 Under Pennsylvania law, there are four types of incorporated municipalities: cities, boroughs, townships, and, in at most two cases, towns. The following cities, boroughs and townships are located in Venango County:

The population ranking of the following table is based on the 2010 census of Venango County.

All content from Kiddle encyclopedia articles (including the article images and facts) can be freely used under Attribution-ShareAlike license, unless stated otherwise. Cite this article:
Venango County, Pennsylvania Facts for Kids. Kiddle Encyclopedia.