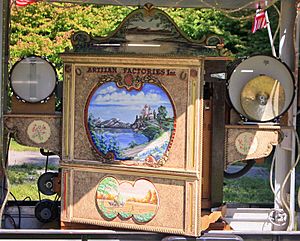 DeBence Antique Music World is a museum in Franklin, Pennsylvania whose collection contains more than 100 antique mechanical musical instruments, including music boxes, band organs, player pianos, a nickelodeon piano, as well as a number of other antiques. Many of the collection's mechanical instruments are rare; a number are among only a few manufactured, and a few are among the last in existence. Although the collection’s value cannot be measured, an offer for a sum of multiple millions of dollars was once rejected.

Dairy farmers Jake and Elizabeth DeBence began their collection in the 1940s in Grove City, Pennsylvania. The DeBences became avid auction attendees after purchasing two Tiffany style lamps for a low cost. The collection continued to grow and to this day donations are still accepted.

When the DeBences retired to Franklin, Pennsylvania in 1965, they housed the collection in their barn a few miles outside of town and opened it to public viewing as the DeBence Music Museum. After Jake's death in March 1992, Elizabeth put the collection up for sale, and a Japanese interest offered her $13 million. Feeling that her husband would have wanted the collection to remain intact and in the area, she turned them down.

She contacted the Chamber of Commerce and Local residents formed a non-profit organization (Oil Region Music Preservation Museum)that raised $1 million in a little more than seven months to buy the collection. The effort included selling wooden music notes for placement in storefronts and local yards as a show of support for keeping the collection in Franklin. The museum is housed in the location of the former G.C. Murphy five and dime store on Liberty Street. DeBence Antique Music World opened for tours in 1994. In addition to the musical instruments, the collection includes a large number of antiques the DeBences collected, and they are displayed along with other items that have musical or local significance. The DeBences' collection of more than 40 Tiffany-style hanging lamps provide the museum’s lighting.

All content from Kiddle encyclopedia articles (including the article images and facts) can be freely used under Attribution-ShareAlike license, unless stated otherwise. Cite this article:
DeBence Antique Music World Facts for Kids. Kiddle Encyclopedia.