The area was first settled in 1796 by Jonathan Titus. Within 14 years, others bought and improved the land lying near him, along the banks of the now-named Oil Creek. He named the village Edinburg(h), but as the village grew, the settlers began to call this little hamlet Titusville. The village was incorporated as a borough in 1849.

Lumber was the principal industry with at least 17 sawmills in the area.

The Titusville City Hall and Titusville Historic District are listed on the National Register of Historic Places. 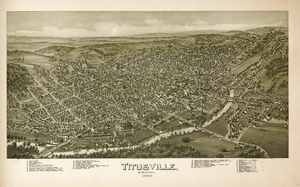 Titusville in 1896, by Thaddeus Mortimer Fowler

Titusville was a slow-growing community until the 1850s, when petroleum was discovered in the region.

Oil was known to exist here, but there was no practical way to extract it. Its main use at that time had been as a medicine for both animals and humans. In the late 1850s Seneca Oil Company (formerly the Pennsylvania Rock Oil Company) sent Col. Edwin L. Drake, to start drilling on a piece of leased land just south of Titusville near what is now Oil Creek State Park. Drake hired a salt well driller, William A. Smith, in the summer of 1859. They had many difficulties, but on August 27 at the site of an oil spring just south of Titusville, they finally drilled a well that could be commercially successful.

Teamsters were needed immediately to transport the oil to markets. Transporting methods improved and in 1862 the Oil Creek & Titusville Railroad was built between Titusville and Corry where it was transferred to other, larger east-west lines. In 1865 pipelines were laid directly to the rail line and the demand for teamsters practically ended. The next year the railroad line was extended south to Petroleum Centre and Oil City. The Union City & Titusville Railroad was built in 1865. That line became part of the Philadelphia & Erie Railroad in 1871. That fall, President U. S. Grant visited Titusville to view this important region.

Other oil-related businesses quickly exploded on the scene. Eight refineries were built between 1862 and 1868. Drilling tools were needed and several iron works were built. Titusville grew from 250 residents to 10,000 almost overnight and in 1866 it incorporated as a city. In 1871, the first oil exchange in the United States was established here. The exchange moved from the city, but returned in 1881 in a new, brick building before being dissolved in 1897.

The first oil millionaire was Jonathan Watson, a resident of Titusville. He owned the land where Drake's well was drilled. He had been a partner in a lumber business prior to the success of the Drake well. At one time it was said that Titusville had more millionaires per 1,000 population than anywhere else in the world.

One resident of note was Franklin S. Tarbell whose large Italianate home still stands. He first moved a few miles south in Venango County and established a wooden stock tank business. About 10 miles (16 km) southeast of Titusville was another oil boom city, Pithole. Oil was discovered in a rolling meadow there in January 1865 and by September 1865 the population was 15,000. But the oil soon ran dry and within four years the city was nearly deserted. Tarbell moved to Titusville in 1870. His daughter, Ida Minerva Tarbell, grew up amidst the sounds and smells of the oil industry. She became an accomplished writer and wrote a series of articles about the business practices of the Standard Oil Company and its president, John D. Rockefeller, which sparked legislative action in Congress concerning monopolies. 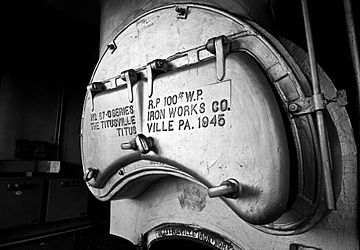 Fire was always a fearful concern around oil and one of the worst was on June 11, 1880. It came to be known as "Black Friday," when almost 300,000 barrels (48,000 m3) of oil burned after an oil tank was hit by lightning. The fire raged for three days until it finally was brought under control. Although the oil was valued at $2 million, there was no loss of life. Another fire occurred on June 5, 1892, when Oil Creek flooded and a tank of petroleum ether overturned. The petroleum ether ignited and in the ensuing explosions 60 men, women and children died. Another lightning strike in 1894 resulted in 27,000 barrels (4,300 m3) lost in a fire.

Oil production in Pennsylvania peaked in 1891, when other industries arose in Titusville. The iron and steel industries dominated the town in the early twentieth century with lumber eventually reclaiming its former cachet. Oil is still relevant, however. Charter Plastics Company, now located in a building that once manufactured pressure vessels, stationary engines and boilers for the oil industry, uses oil in its production process.

According to the United States Census Bureau, the city has a total area of 2.9 square miles (7.5 km2), all land. 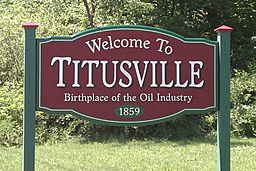 The Drake Well Museum is a 290-acre (1.2 km2) park where Colonel Edwin Drake successfully drilled for oil. It consists of a museum with artifacts, outdoor operating oil field equipment and a research library with photographs, manuscripts and more. The Drake Well Replica operates from May to September and the site and museum are open year-round with frequent demonstrations and tours.

The Oil Creek and Titusville Railroad has a station in Titusville. This scenic ride takes travelers to nearby Oil City.

Titusville has a yearly Oil Festival in August.

All content from Kiddle encyclopedia articles (including the article images and facts) can be freely used under Attribution-ShareAlike license, unless stated otherwise. Cite this article:
Titusville, Pennsylvania Facts for Kids. Kiddle Encyclopedia.