Forest County is a county located in Western Pennsylvania. As of the 2010 census, the population was 7,716, making it the third-least populous county in Pennsylvania. Its county seat is Tionesta. The county was created in 1848 and later organized in 1857.

Forest County was created on April 11, 1848, from part of Jefferson County. The county was enlarged on October 31, 1866, when part of Venango County was incorporated into the county. Forest County was named for the forests contained within its limits.

Part of Cook Forest State Park is in Forest County. 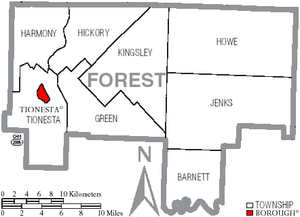 Under Pennsylvania law, there are four types of incorporated municipalities: cities, boroughs, townships, and, in at most two cases, towns. The following boroughs and townships are located in Forest County:

The population ranking of the following table is based on the 2010 census of Forest County. The jump in census figures between the 2000 and 2010 census, is due in a large part to the opening of the State Correctional Institution- Forest (SCI- Forest) in October 2004. SCI Forest houses approximately 2,200 inmates at their facility in Marienville, PA.

All content from Kiddle encyclopedia articles (including the article images and facts) can be freely used under Attribution-ShareAlike license, unless stated otherwise. Cite this article:
Forest County, Pennsylvania Facts for Kids. Kiddle Encyclopedia.