Tionesta is a borough in Forest County, Pennsylvania, United States. The population was 483 at the 2010 Census. It is the county seat of Forest County. The name is a Native American word meaning "home of the wolves".

Tionesta lies at the heart of a forested region that is a popular destination for hunters and other outdoor lovers. While the general area has seen some growth as a result of this tourist activity, the borough proper has suffered several setbacks in recent years including the closure of an Evenflo plant that was a major employer and a 2002 fire that leveled an entire block of the borough's downtown area.

According to the United States Census Bureau, the borough has a total area of 1.3 square miles (3.4 km2), all land.

There were 282 households, out of which 22.0% had children under the age of 18 living with them, 49.6% were married couples living together, 7.1% had a female householder with no husband present, and 41.1% were non-families. 36.9% of all households were made up of individuals, and 24.1% had someone living alone who was 65 years of age or older. The average household size was 2.18 and the average family size was 2.88. 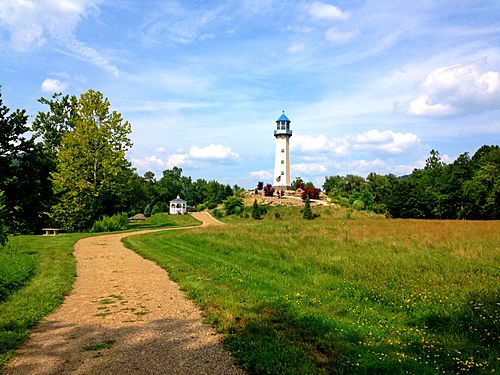 The Sherman Memorial Lighthouse, located on a 22.5-acre island in the Allegheny River, about 60 miles southeast of Erie. It opened in time to help the Forest County community of Tionesta celebrate its 150th birthday. The 75-foot-tall lighthouse is on a 25-foot-high mound of soil on what was once called Hunters Island, but now is called Lighthouse Island.

It ultimately will share the island with the planned Pennsylvania Hunting and Fishing Museum. Most lighthouses are more functional than decorative inside, but Sherman Lighthouse is different. It is finished and decorated as a showcase for the Sherman family memorabilia and to display a collection of more than 280 lighthouse replicas.

The octagon-shaped tower is made of timber instead of masonry or concrete. The 25-foot-tall aluminum and glass lantern room is equipped with the kind of beacon that a small regional airport would use. There are 76 steps in the spiral stairs that lead up the tower.

All content from Kiddle encyclopedia articles (including the article images and facts) can be freely used under Attribution-ShareAlike license, unless stated otherwise. Cite this article:
Tionesta, Pennsylvania Facts for Kids. Kiddle Encyclopedia.