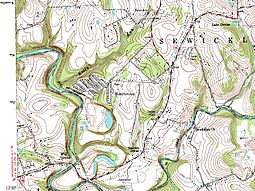 Hutchinson is a village located in Westmoreland County, Pennsylvania, and is part of Sewickley Township, Pennsylvania. As of the 2000 census, Hutchinson had 99 single family homes, and a total population of 322. Although only about the size of a small subdivision, Hutchinson has its own post office and zip code: 15640. Hutchinson was built as a coal mining town in 1924, and is geographically located above the Hutchinson Mine.

The community was named for S. P. Hutchinson, president of Westmoreland Coal Company at the time the town was built. Because it was built much later than nearby "coal patch" towns, Hutchinson was distinguished by an unusually spacious layout, in which houses had larger yards than one would find in older coal mining communities.

All content from Kiddle encyclopedia articles (including the article images and facts) can be freely used under Attribution-ShareAlike license, unless stated otherwise. Cite this article:
Hutchinson, Pennsylvania Facts for Kids. Kiddle Encyclopedia.