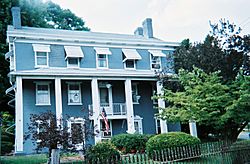 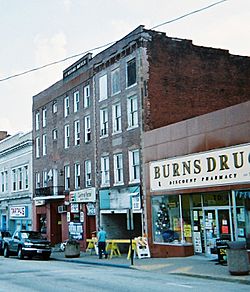 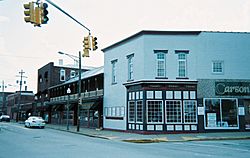 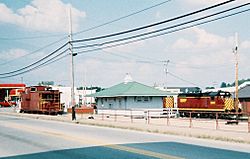 Scottdale is a borough in Westmoreland County, Pennsylvania, 32 miles (51 km) southeast of Pittsburgh.

Early in the 20th century, Scottdale was the center of the Frick coke interests. It had steel and iron pipe mills, brass and silver works, a casket factory, a large milk-pasteurizing plant, and machine shops; all of the aforementioned are presently defunct. Scottdale is notable for its economic decline from a formerly prosperous coke-town into an archetypal Rust Belt town. Duraloy Technologies, "a supplier of specialty high alloy, centrifugal and static cast components and assemblies" is the last remnant of Scottdale's steel related prosperity.

It is difficult to identify when the first non-Indian settler arrived in what is now the Borough of Scottdale, although the area witnessed an influx of Scotch-Irish immigrants in the late 1770s. In the mid-19th century, part of the present-day townsite was the location of a distillery, flour mill and post office known as Fountain Mills.

The Pennsylvania Railroad and Baltimore and Ohio Railroad each built branch lines through the community in the early 1870s. With the coming of the railroads, the community’s economy shifted from agriculture to manufacturing and mining. Two brothers who were local farmers, Peter and Jacob Loucks, realized the impact the railroads could have on the area and laid out a small townsite consisting of 24 lots, which went on sale in 1872.

Scottdale was incorporated as a borough on February 5, 1874 and at that time named in honor of Thomas A. Scott, who had been president of the Pennsylvania Railroad and served as Assistant Secretary of War during the Civil War. Because Scottdale sits atop major coal deposits, the community flourished due to the surrounding coal mines, as well as ovens for converting coal into coke (fuel). The H. C. Frick Coke Company, controlled by Henry Clay Frick, was headquartered here. Scottdale’s factories in the early 20th century also produced iron pipe, tin, knives, steam engines, and caskets.

Scottdale has two sites on the National Register of Historic Places: Scottdale Armory (1929) at 501 North Broadway Street, and the Scottdale Historic District, which encompasses the oldest parts of the borough.

The oldest extant building in the borough is the Jacob Loucks House at 115 Walnut Avenue, built in 1853. Otherwise, the borough’s oldest residences are concentrated on Loucks Avenue, where many houses date from the 1880s. As well, three downtown retail buildings can be dated to approximately 1880: 101 Pittsburgh Street, 143 Pittsburgh Street, and 4-10 South Broadway Street.

The West Overton Museum in Scottdale is the only pre-Civil War village still intact today in Pennsylvania. It was named to the National Register of Historic Districts in 1985 as an outstanding example of a 19th-century rural industrial village complete with farm, two floors of the Overholt Mill/Distillery, industrial tools, Blacksmith Shop, a wash house and a smokehouse. It is a stop on the American Whiskey Trail

According to the United States Census Bureau, the borough has a total area of 1.2 square miles (3.1 km2), all of it land.

All content from Kiddle encyclopedia articles (including the article images and facts) can be freely used under Attribution-ShareAlike license, unless stated otherwise. Cite this article:
Scottdale, Pennsylvania Facts for Kids. Kiddle Encyclopedia.