Connellsville is a city in Fayette County, Pennsylvania, United States, 50 miles (80 km) southeast of Pittsburgh on the Youghiogheny River, a tributary of the Monongahela River. It is part of the Pittsburgh Metro Area. The population was 7,637 at the 2010 census, down from 9,146 at the 2000 census.

During the French and Indian War, a British army commanded by General Edward Braddock approached Fort Duquesne and crossed the Youghiogheny River at Stewart's Crossing, which is situated in the middle of what is now the city of Connellsville.

Connellsville was officially founded as a township in 1793 then as a borough on March 1, 1806, by Zachariah Connell, a militia captain during the American Revolution. In February 1909, balloting in New Haven and Connellsville resulted in these two boroughs joining and becoming the first city in Fayette County on May 12, 1911.

Due to the city's location in the center of the Connellsville Coalfield, coal mining, coke production, and other accompanying industries became the major sources of employment and revenue during the late 19th and early 20th centuries. Connellsville became known at the "Coke Capital of the World" due to the amount and quality of coke produced in the city's many beehive ovens. During this time, Connellsville had more millionaires per capita than any other city in the United States.

Connellsville is located in northeastern Fayette County along the Youghiogheny River, a north-flowing tributary of the Monongahela River. The city is on both sides of the river, with the downtown on the eastern side. It is bordered to the south by the borough of South Connellsville. U.S. Route 119 passes through the northern and western sides of the city, leading north 22 miles (35 km) to Greensburg and southwest 11 miles (18 km) to Uniontown, the Fayette County seat. Pittsburgh is 50 miles (80 km) to the northwest via US 119 and Interstate 76.

The Youghiogheny River Trail, a part of the Great Allegheny Passage, runs through Connellsville. 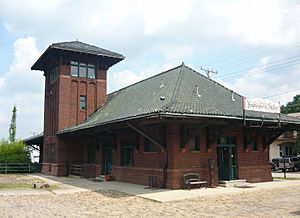 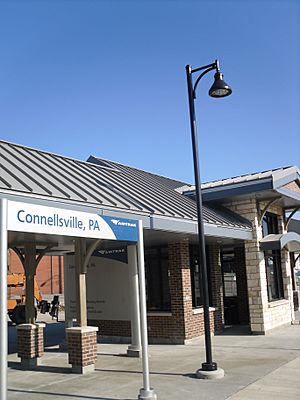 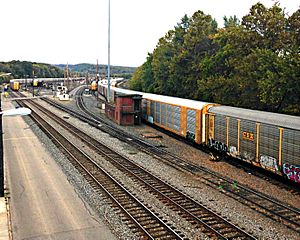 Connellsville has the distinction of having been served at one time by five railroads: the Baltimore and Ohio Railroad, the Pennsylvania Railroad, the Western Maryland Railroad, the Pittsburgh and Lake Erie Railroad, and the Norfolk and Western Railroad.

The Baltimore and Ohio Railroad (now CSX Transportation) entered Connellsville on the right (east) side of the Youghiogheny River. This main line originated in Baltimore, passed through Cumberland, Maryland heading west followed the river to Pittsburgh, then continuing on to Chicago. In 1934, the B&O switched its passenger trains to the tracks of the P&LE and used the P&LE station.

The Pennsylvania Railroad's Southwest branch from Greensburg entered Connellsville from Connellsville Township, crossing Route 119 and the North End, then crossing the Youghiogheny on a trestle in the middle of the town; this line terminated in Uniontown, Pennsylvania. The line has been abandoned, and the trestle was demolished in the late 1980s. It remains as a coal loading facility behind the location of the former Back Creek Lumber Co where the line was severed. This line is now operated by the Southwest Pennsylvania Railroad.

The Western Maryland Railroad's line crossed the Alleghenies from Cumberland and entered Connellsville on the right side of the Youghiogheny River, connecting with two separate railroad companies. The first connection was with the Pittsburgh and Lake Erie Railroad's line from Pittsburgh which continued down the right side of the river to Pittsburgh. This was in direct competition with the B & O directly across the river. The second connection of the Western Maryland was to the Norfolk and Western Railroad which crossed the river to the left side on the former Pittsburgh & West Virginia railroad bridge.

The Norfolk & Western branch was acquired by the Wheeling and Lake Erie Railroad, which built a new connection on the left side of the river to CSX, which severed the old line across the bridge. This historic bridge is now threatened with demolition. Several of these former railway lines have been abandoned and the right of way acquired for other uses. The former Western Maryland Railroad and Pittsburgh & Lake Erie lines are now the part of the Youghiogheny River Trail.

Amtrak's Capitol Limited provides passenger rail service to Connellsville, with service to Chicago, Pittsburgh, Washington, DC, and other points in between.

Historically, the mining and steel working Connellsville-Greensburg-Scottdale-Jeannette-Mt Pleasant-Irwin-Latrobe area was served by a 339-mile interurban trolley system, the wide track gauge West Penn Railways. It operated until 1952. Before the better economy of the area plus improved roads allowed more ownership and use of automobiles, the run every hour 5 cents a ride bright orange West Penn trolleys provided reliable local transportation.

The main route through Connellsville is U.S. Route 119, which links Connellsville with nearby cities Uniontown and Greensburg, and provides access to many of the business on the outskirts of the city. Pennsylvania Route 201 ends in Connellsville, and PA 711 serves as the main street through downtown before heading into the local mountains.

All content from Kiddle encyclopedia articles (including the article images and facts) can be freely used under Attribution-ShareAlike license, unless stated otherwise. Cite this article:
Connellsville, Pennsylvania Facts for Kids. Kiddle Encyclopedia.