Bolivar ( rhymes with "Oliver") is a borough in Westmoreland County, Pennsylvania, United States. The population was 465 at the 2010 census.

There were 200 households, out of which 24.5% had children under the age of 18 living with them, 64.0% were married couples living together, 4.5% had a female householder with no husband present, and 26.0% were non-families. 24.5% of all households were made up of individuals, and 16.5% had someone living alone who was 65 years of age or older. The average household size was 2.45 and the average family size was 2.85.

The first settlers arrived in Bolivar about the year 1829 and settled between Tubmill Creek and the Conemaugh River. Most of the men were employed by the Pennsylvania Canal. The canal was located on the south side of the Conemaugh River. Some of the locks still may be seen west of town.

Several small brickyards were started in the area, producing a red brick. Some of the houses on Second Street were constructed of these brick. They are still well-preserved today after exposure to the elements for over a century. 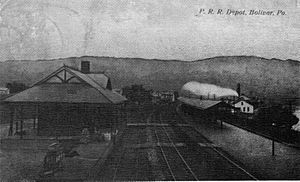 The Pennsylvania Railroad replaced the canal in 1846. Brickyards No. 1, and No. 2, and No. 3 were constructed between the Conemaugh River and the railroad. Bolivar was beginning to grow and prosper and was known as a "Brick Town". In 1863 Bolivar withdrew from Fairfield Township and became a borough, under the grounds that it was designed like many other boroughs of the time, in a checkerboard pattern. Bolivar borough was incorporated November 25, 1863.

The north side of the Conemaugh was a very desirable location for new construction of brickyards due to the completion of the Western Pennsylvania Railroad from Blairsville to Bolivar, and the close proximity to coal and clay. No. 4 Brickyard at the time of its first operation was the largest brickyard in the North American continent, having a capacity of 100,000 paving blocks each day. The Robinson Brothers also constructed a brickyard, and it is the only one in existence at the present time, being known as Garfield Refractories Co. The Enamel Works started in 1899 with a large government contract. The Bolivar School was constructed of brick made from the Enamel Works. 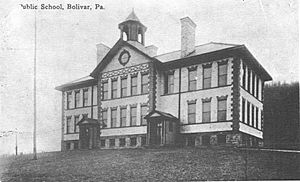 J. B. Hammond got control of the five brickyards in Bolivar and several in Clearfield County just before the start of the 20th century, and a rapid expansion took place. This might be called "The Golden Era of Bolivar." A large hotel was started near the station and a large department store was planned for Washington and Second Streets. Pipes were laid under the streets for central heating, but the dream was never realized. A panic took place in 1902, the bank failed (the depositors were paid in full later) and the brickyards were forced into receivership. 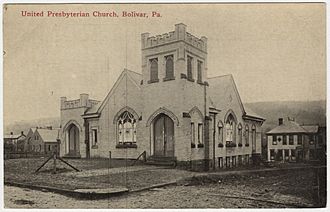 The United Presbyterian Church from a pre-1923 postcard

From 1914 through the 1920s, Bolivar enjoyed its second boom period. Soissons and General Refractories took over the brickyards and the Lacolle Mine and Ridgeview Coal Mines were opened, and shipped large quantities of coal. Mining, lumbering and manufacturing employed many persons. The Lincoln Brickyard enjoyed a brief period of prosperity under the leadership of Lorenzo Mumford. He was a leader, designer of bricks, and salesman, and kept the yard going for many months. He sold a million bricks to the Chase National Bank in New York for construction of one of its banks.

All content from Kiddle encyclopedia articles (including the article images and facts) can be freely used under Attribution-ShareAlike license, unless stated otherwise. Cite this article:
Bolivar, Pennsylvania Facts for Kids. Kiddle Encyclopedia.