The name "Acme" refers to the area's location atop Chestnut Ridge in the Allegheny Mountains. 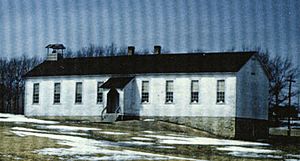 Acme has always been an agricultural community; however, three attempts to develop resorts in the area have likely been inspired by its gateway position along the edge of the Laurel Highlands.

In 1962, architect Peter Berndtson developed a master plan for a 125-acre (0.51 km2) property named Treetops & Mountain Circles. Berndtson, an original apprentice of Frank Lloyd Wright, designed a network of twenty-four private houses, each within a 300-foot (91 m) diameter clearing in the woods. If completed, the clearings and their connecting roads would have depicted a bunch of grapes when viewed from the sky. Only two homes—those for developers Harry Blum and James Balter—were actually built.

Forty-two years later, local homebuilder Thomas D. Papinchak deconstructed the Donald C. Duncan House in Lisle, Illinois (a suburb of Chicago) and relocated it to the Acme property. The Duncan House was designed by Wright as an instance of his Usonian style. In honor of the two architects, the failed development has been renamed Polymath Park Resort. Since 2007, all three houses have been offered as overnight accommodations for visitors to Wright's Fallingwater and Kentuck Knob in nearby Stewart Township.

On November 7, 1965, Pittsburgh real-estate developer Scott Hamilton advertised Bear Rocks, a new "Mountain Ski Area", in the (now-defunct) Pittsburgh Press newspaper. The development in a section of forest originally known as Southerwood, along the western descent of Chestnut Ridge, featured over 1000 house lots in a wooded setting connected by 22 miles of roads. Codes prevented the cutting of more trees than necessary for home construction, unconnected buildings, business restrictions, prohibitions on brick and metal siding and similar provisions intended to maintain the rural character of the development. Two separate lodge buildings were built; one at the upper entrance to the development and another at the base of the ski slopes. At its peak, the Bear Rocks Ski area featured eight slopes and trails with a double-chair lift and snow-making equipment. The advertisement also boasted a private fishing lake, "magnificent" swimming pool, rustic cocktail lounge, tennis, horseback riding, social activities, and "golf at a private country club nearby."

Bear Rocks reportedly ceased ski operations after the 1973 season. The ski lodge and restaurant burned to the ground a few years later and was not rebuilt, however the community lodge remains as a focal point for residents. The community continues to grow, and new homes have been constructed in the clearings of the former ski slopes and continue to be built on vacant lots. While the rustic character of the development is still very evident, it has suffered somewhat in recent years as the Bear Rocks codes have been increasingly ignored, including the clear-cutting of lots, and some logging operations.

Following in the footsteps of the very successful Bear Rocks, this much smaller resort featuring a recreational lake, a swimming pond, and wooded house lots, Forest Lake, was developed adjacent to the eastern edge of Bear Rocks along Bear Rocks road. As part of the sales promotion, a red caboose, now greatly decayed, was placed on one of the lots. Forest Lake never enjoyed the success of its larger neighbor and only 5 houses were built.

Pennsylvania Route 31, a two-lane artery, runs east and west through the center of Acme. The Pennsylvania Turnpike parallels the state road to the north, with the closest interchange in Donegal, 2.5 miles (4.0 km) to the southeast. Because Turnpike traffic is occasionally diverted to the state route, additional lanes were added to accommodate truck traffic down the latter's western descent of the Allegheny Mountains, on a 2-mile (3 km) stretch of highway known as Three Mile Hill.

Donegal Highlands, an 18-hole public golf course, offers a unique challenge to golfers of all abilities.

All content from Kiddle encyclopedia articles (including the article images and facts) can be freely used under Attribution-ShareAlike license, unless stated otherwise. Cite this article:
Acme, Pennsylvania Facts for Kids. Kiddle Encyclopedia.