There are also three Donegal Townships in Pennsylvania. 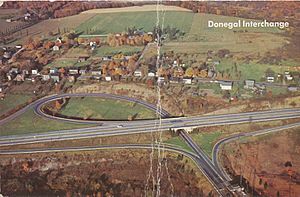 Donegal is a borough in Westmoreland County, Pennsylvania, United States. It is a distinct municipality from the adjacent Donegal Township. The population was 165 at the 2000 census. Donegal is best known as an exit on the Pennsylvania Turnpike with restaurants, gas stations, and two hotels for travelers.

It was named after the town and county of Donegal in Ireland.

According to the United States Census Bureau, the borough has a total area of 0.3 square miles (0.78 km2), all of it land.

There were 72 households, out of which 26.4% had children under the age of 18 living with them, 54.2% were married couples living together, 9.7% had a female householder with no husband present, and 34.7% were non-families. 29.2% of all households were made up of individuals, and 9.7% had someone living alone who was 65 years of age or older. The average household size was 2.29 and the average family size was 2.83.

Donegal Township is home to a busy turnpike exchange that sees thousands of people every year. Most travelers are on their way to one of the many local attractions. Two of the main attractions are the 7 Springs Ski Resort and Hidden Valley Ski Resort. These resorts provide a steady winter income for many local businesses. There are also several Frank Lloyd Wright homes within driving distance that can be toured such as The Duncan House, Kentuck Knob and Falling Water. Falling Water is nestled right up to Ohiopyle Nature Park where visitors are welcome to hike, bike, swim and sunbathe. 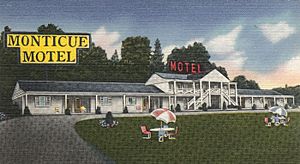 All content from Kiddle encyclopedia articles (including the article images and facts) can be freely used under Attribution-ShareAlike license, unless stated otherwise. Cite this article:
Donegal, Pennsylvania Facts for Kids. Kiddle Encyclopedia.