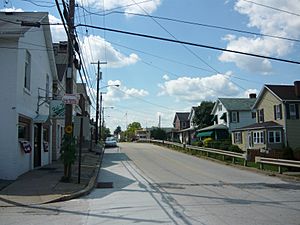 Herminie is a census-designated place (CDP) in Sewickley Township, Westmoreland County, Pennsylvania, United States. The population was 856 at the 2000 census.

Herminie was named for Herminie Berwind, whose husband, Charles Berwind, was President of the Ocean Coal Company. The first mine at Herminie, known as the "Ocean No. 1 Mine," was opened in 1893 by Berwind-White Coal Company, of which Ocean Coal Company was a subsidiary. Fifty double houses were built for miners, plus five single-family houses for managers on Church Street. By 1900, the mine employed 271 people.

Herminie was the scene of two major strikes. During the Westmoreland County Coal Strike of 1910–1911, miners were evicted from company-owned houses, which were used to house strikebreakers, predominantly southern Blacks. The strike was unsuccessful from the strikers' perspective. Another strike in 1922 resulted in recognition of the United Mine Workers union.

Ocean No. 1 Mine closed in 1938 due to water problems, although other mines in the nearby area continued operating.

According to the United States Census Bureau, the CDP has a total area of 0.2 square miles (0.52 km2), all of it land.

All content from Kiddle encyclopedia articles (including the article images and facts) can be freely used under Attribution-ShareAlike license, unless stated otherwise. Cite this article:
Herminie, Pennsylvania Facts for Kids. Kiddle Encyclopedia.