Coudersport is a borough in and the county seat of Potter County, Pennsylvania, United States, located approximately 110 miles (180 km) east by south of Erie on the Allegheny River. The population was 2,546 at the 2010 census.

The Coudersport and Port Allegany Railroad Station, Coudersport Historic District, and Potter County Courthouse are listed on the National Register of Historic Places.

According to the United States Census Bureau, the borough has a total area of 5.7 square miles (15 km2), all of it land.

Coudersport lies in a broad valley at the joining of the Allegheny River and Mill Creek. It is surrounded by the great hilltop plateaus of the Allegheny highlands. Highways enter north and south on Pennsylvania Route 44, the very old Jersey Shore (log road)Turnpike, and from west to east on U.S. Route 6, the "Grand Army of the Republic Highway", which had been long a major mid-east-states east-west corridor before Interstate highways of the late 1950s. The most noted hilltops, located here on this plateau, are Dutch Hill stretching southeastly, and Vader Hill stretching southwestly. The Allegheny river makes a quick turn at this point, going from North to West; for that reason these features are distinctly individual from afar in the broad turning valley, and rise 2400–2500 feet above sea-level. 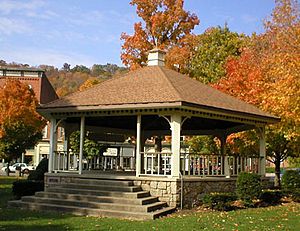 The newly re-opened Ice Mine is a popular tourist attraction in Coudersport. The mine freezes with ice in the summer, and the ice melts in the winter.

Coudersport was the home of "Untouchable" Eliot Ness at the time of his death. He was a principal in the Guaranty Paper Corporation, which specialized in watermarking legal & official documents to prevent counterfeiting. The company moved from Cleveland to Coudersport around 1955 because operating costs were lower. Eliot and his wife Betty & son Bobby were living in the Leon & Lucille Brocklebank home from 1956-1957, and he died from a heart attack at their kitchen sink in May 1957.

Located in the northern portion of Coudersport, is the Coudersport Area Recreation Park (CARP). This sports and recreation park was begun in the 1960s by a group of town leaders, which included Dr. William L. Mitchell, a local veterinarian. It currently has a football field with track & field capabilities, baseball and softball fields, basketball courts, picnic areas and hiking trails.

According to historical books at the PSU University Park library, Coudersport derived its name from a Dutchman named Couder who was a primary funder for the surveying of the future town as a "port" on the Allegany (or Allegheny) River. Thus becoming Couder's Port.

Coudersport has the former headquarters of Adelphia, which went bankrupt after internal corruption in 2002.

The fictional town of Farringdon, depicted in the Judy Bolton detective series by Margaret Sutton, is based on Coudersport, where Sutton grew up and attended school. The school, town hall, and several recognizable residences are described in her books. Judy Bolton Days, an annual festival honoring the books of the late Sutton, is hosted each October by the local Chamber of Commerce.

Actress Riki Lindhome was born in Coudersport in 1979.

All content from Kiddle encyclopedia articles (including the article images and facts) can be freely used under Attribution-ShareAlike license, unless stated otherwise. Cite this article:
Coudersport, Pennsylvania Facts for Kids. Kiddle Encyclopedia.