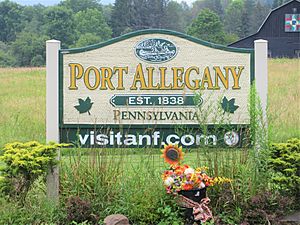 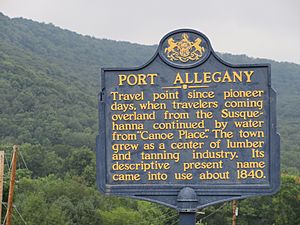 Port Allegany is a borough in McKean County, Pennsylvania, United States. The population was 2,157 at the 2010 census.

The town's tree-lined streets lie in the foothills of the Appalachian Mountains, 30 miles west of the Allegheny River's headwaters.

Originally known as Canoe Place, the town’s name was changed to Port Allegany in 1838.

The town developed as a port on the Allegheny River, and provided a place where travelers coming overland from the Susquehanna River could continue by boat.

Before the arrival of the first European settlers, the area was densely forested with Eastern Hemlock. Many of these sometimes massive trees were cut for lumber or sometimes only for their bark, which was used in the tanning industry. The rough and ready lifestyles and skills of the men who did this work are commemorated each year at the "Barkpeelers' Festival" at the Pennsylvania Lumber Museum in nearby Ulysses, Pennsylvania. Many older homes, barns and other buildings in the region were at least partly built with hemlock lumber.

There were 924 households, out of which 35.3% had children under the age of 18 living with them, 51.0% were married couples living together, 11.7% had a female householder with no husband present, and 32.5% were non-families. 27.6% of all households were made up of individuals, and 13.1% had someone living alone who was 65 years of age or older. The average household size was 2.54 and the average family size was 3.10. 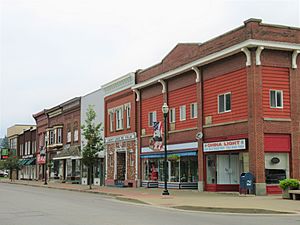 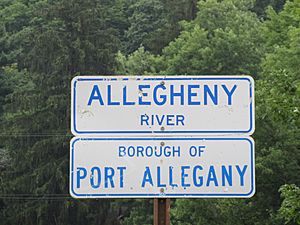 Signs at the bridge where Route 155 joins Route 6

Parts of the 2010 film Unstoppable were filmed in Port Allegany and many of the small communities nearby.

In the 1800s natural gas was discovered in the area, which led to the expansion of industries including glass firms, chemical plants, cheese factories, machine shops, brick plants, sawmills, planing mills and tanneries. The area also produces crude oil and it is not unusual to see small gas or oil wells and storage tanks in fields, forests or back yards in the region. The introduction of hydraulic fracturing produced an increase in local production of gas and oil, and a boost to the local economy, in the 2000s and 2010s.

Port Allegany has long been associated with glass manufacturing. Saint-Gobain, a glass container producer, is located there, in a facility that has been owned at different stages by Pierce Glass and Ball-Incon. A concrete tower that is part of the manufacturing plant is the tallest structure in Port Allegany and is visible from most of the small downtown area. From 1937 to 2016, Port Allegany was also home to a factory of the Pittsburgh Corning Corporation. The "PC", as the factory was known locally, was the only producer of architectural glass building blocks in the United States, and also produced foamglas insulation.

In the middle of the 20th century, the town was home to a factory that manufactured Kewpie dolls.

All content from Kiddle encyclopedia articles (including the article images and facts) can be freely used under Attribution-ShareAlike license, unless stated otherwise. Cite this article:
Port Allegany, Pennsylvania Facts for Kids. Kiddle Encyclopedia.