Foxburg is a borough in Clarion County, Pennsylvania, United States. It is located along the east bank of the Allegheny River, about 2 miles (3 km) north of the mouth of the Clarion River. As of the 2010 census it had a population of 183.

The town takes its name from the Fox family of Philadelphia, former owners of the land upon which the town was built. Samuel Mickle Fox (1763-1808), along with his brother George and brothers-in-law Joseph Parker Norris and George Roberts, purchased a number of tracts of land in western Pennsylvania from the Commonwealth during the 1790s. Six of these tracts, numbered #5725-5730, comprising 6,600 acres (27 km2), were contiguous and located along the Allegheny north of its confluence with Toby's Creek (today's Clarion River). The present town of Foxburg is located on what was designated tract #5729.

Samuel's son Joseph purchased these tracts from his father's estate in 1816 and established a residence here ten years later. This was south of the town near the mouth of the Clarion. It became known to generations as "the Fox Mansion" or simply "the Mansion". Succeeding generations would make it a seasonal residence for the next 140 years. 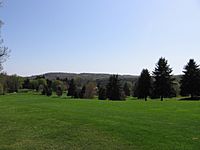 The town of Foxburg was founded amidst the oil developments in western Pennsylvania in 1870. At its height during the early 1870s it had a population of over 1,000. It remained a village until its incorporation as a borough on February 6, 1930. The borough was once served by two railroads. One was the Allegheny Division of the Pennsylvania Railroad, and the other was the Baltimore and Ohio Railroad. The B&O actually ran over the old Foxburg Bridge from 1921 to 1964. Today, both railroads are gone, as is the bridge, which was demolished on July 24, 2008.

The town is home to the nine-hole Foxburg Country Club, founded in 1887. It has been recognized as the oldest continuously operated course in the United States.

There were 101 households, out of which 33.7% had children under the age of 18 living with them, 67.3% were married couples living together, 9.9% had a female householder with no husband present, and 19.8% were non-families. 18.8% of all households were made up of individuals, and 10.9% had someone living alone who was 65 years of age or older. The average household size was 2.72 and the average family size was 3.07. 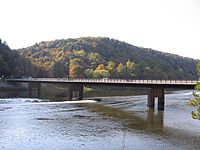 All content from Kiddle encyclopedia articles (including the article images and facts) can be freely used under Attribution-ShareAlike license, unless stated otherwise. Cite this article:
Foxburg, Pennsylvania Facts for Kids. Kiddle Encyclopedia.