The Kinzua Dam, on the Allegheny River in Warren County, Pennsylvania, is one of the largest dams in the United States east of the Mississippi River. It is located within the Allegheny National Forest.

The dam is located 6 miles (10 km) east of Warren, Pennsylvania, along Route 59, within the 500,000-acre (200,000 ha) Allegheny National Forest. A boat marina and beach are located within the dam boundaries. In addition to providing flood control and power generation, the dam created Pennsylvania's second deepest lake, the Allegheny Reservoir, also known as Kinzua Lake.

The lake extends 25 miles to the north, nearly to Salamanca, New York, which is within the Allegany Reservation of the Seneca Nation of New York. Federal condemnation of tribal lands to be flooded for the project displaced more than 600 Seneca members and cost the reservation 10,000 acres (4,000 ha), nearly one-third of its territory and much of its fertile farmland.

In 1936, a major flood struck the Pittsburgh metropolitan area, which promted Congress to pass the Flood Control Acts of 1936 and 1938, authorizing the construction of a dam on the Allegheny River. Construction on the dam was not begun by the US Army Corps of Engineers until 1960; it was completed in 1965. By that time considerable opposition to the dam had developed, particularly among the Seneca Nation of Indians based in New York. Due to proposed flooding of lands behind the dam to create a lake for recreation and hydropower, they would lose numerous communities and thousands of acres of fertile farmland. More than 600 families were displaced by the project and forced to relocate.

The main purpose of the dam was flood control on the Allegheny River. Kinzua controls drainage on a watershed of 2,180 square miles (5,650 km2), an area twice the size of the state of Rhode Island. According to the Corps of Engineers, side benefits derived from the dam include drought control, hydroelectric power production, and recreation. The hydroelectric power is distributed largely to Pittsburgh.

The total cost of construction was approximately $108 million. According to the US Army Corps of Engineers, Kinzua more than paid for itself in 1972 when tropical storm Agnes dumped continual heavy rains on the watershed, bringing the reservoir to within three feet of its maximum storage capacity. Downstream flood damages of an estimated $247 million were avoided. The dam at Kinzua has prevented an estimated $1 billion in flood damages since becoming operational. 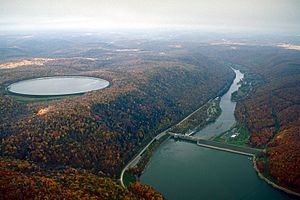 Immediately above the downstream side of the dam is the Seneca Pumped Storage Generating Station, a hydroelectric power plant using pumped storage to accommodate peak electrical load by storing potential energy in water pumped into an upper reservoir. It uses base load electricity, then reclaims that energy when needed by allowing the water to fall back down and drive generators along the way.

The Allegheny Reservoir, also known as Kinzua Lake, and surrounding area have been opened up for a variety of recreational activities such as camping, hiking, snowmobiling and boating along the reservoir. The US Forest Service created four highly developed reservoir campgrounds, along with five primitive (boat to or hike only) camping areas. Several scenic overlooks with miles of hiking trails and information centers were also constructed along the reservoir. Much of Allegheny National Recreation Area surrounds Allegheny Lake. In addition, the Seneca Nation maintains a fully developed campground on their reservation at the northern end of the reservoir in New York.

Construction of the dam condemned 10,000 acres (4,000 ha) of the Allegheny Reservation, nearly one-third of its territory, which had been granted to the Seneca nation in the Treaty of Canandaigua (signed by President Washington). This resulted in the displacement and forcing relocation of 600 Seneca from their community within the reservation. In 1961, citing the immediate need for flood control, President John F. Kennedy denied a request by the Seneca to halt construction.

In Pennsylvania, the government also condemned for the dam project a land grant made to the historic Seneca leader Cornplanter. His last direct heir and great-great-great-grandson, Jesse, had died without issue in 1957, and by the 1960s, his indirect descendants had already moved to Salamanca, New York, near the northern shore of the Allegheny Reservoir.

Condemnation of Corydon and Kinzua

The construction of the dam and the filling of the Allegheny Reservoir required the condemnation of several towns and communities in the reservoir's floodplain. Two townships, Kinzua in Pennsylvania and Elko (Quaker Bridge) in New York, dissolved their incorporations, while the Warren County portion of Corydon was likewise subsumed; others, such as the McKean County portion of Corydon, PA and Onoville, NY, retained their government but lost much of their population when the cores of their communities were flooded. All residents were forced out through eminent domain and required to relocate. The state attempted to buy out and evacuate what was left of Red House at the same time. That community successfully resisted, due to its distance from the reservoir (the evacuation of Red House was intended to expand Allegany State Park, not to clear land to be flooded). Red House (population 38 as of 2010) has maintained its incorporation.

To partially compensate for the loss of these communities, the government set aside 305 acres of land for Seneca resettlement upstream in two New York communities: Steamburg (160 one-acre plots of land located south of the existing hamlet of the same name) and Jimerson Town (145 one-acre plots of land west of the city of Salamanca, near the then-extant community of Shongo). Jimerson Town has become identified as one of the two capitals of the Seneca Nation.

The dam project also forced the displacement of Camp Olmsted, owned by the Chief Cornplanter Council of the Boy Scouts of America. The campsite had been located on bottomland along the Allegheny River, but dam construction forced it to be moved up the hillside.

The song "As Long as the Grass Shall Grow", written by Peter La Farge and recorded by Johnny Cash at the first track of his 1964 album Bitter Tears: Ballads of the American Indian, relates the loss of Seneca nation land in Pennsylvania due to the construction of the Kinzua Dam.

In 2014, filmmakers Paul Lamont and Scott Sackett began production on a documentary for PBS titled Lake of Betrayal. The film is slated for broadcast in the fall of 2016.

All content from Kiddle encyclopedia articles (including the article images and facts) can be freely used under Attribution-ShareAlike license, unless stated otherwise. Cite this article:
Kinzua Dam Facts for Kids. Kiddle Encyclopedia.