John Constantine Unitas (May 7, 1933 – September 11, 2002), nicknamed "Johnny U" and "The Golden Arm", was an American football player in the National Football League (NFL). He spent the majority of his career playing for the Baltimore Colts. He was a record-setting quarterback, and the NFL's most valuable player in 1959, 1964, and 1967. For 52 years he held the record for most consecutive games with a touchdown pass (which he set between 1956 and 1960). Unitas was the early example of the modern era marquee quarterback with a strong passing game, media fanfare, and widespread popularity. He has been consistently listed as one of the greatest NFL players of all time.

Unitas was inducted into the American Football Association's Semi Pro Football Hall of Fame in 1987.

John Constantine Unitas was born in Pittsburgh, he grew up in the Mount Washington neighborhood. When Unitas was five years old, his father died leaving the young boy to be raised by his mother. Attending St. Justin's High School in Pittsburgh, Unitas played halfback and quarterback. After high school, he looked for an opportunity to play college football.

The University of Louisville offered him the chance and Unitas left home to play for the Cardinals.

At the age of 21 on November 20, 1954, Unitas married his high school sweetheart Dorothy Hoelle; they lived in Towson and had five children before divorcing. Unitas' second wife was Sandra Lemon, whom he married on June 26, 1972; they had three children, lived in Baldwin, and remained married until Unitas' death on September 11, 2002.

Unitas lived most of the final years of his life severely hobbled. Due to an elbow injury suffered during his playing career, he had only very limited use of his right hand, and could not perform any physical activity more strenuous than golf due to his artificial knees.

On August 24, 2013, Unitas was posthumously inducted into the National Lithuanian American Hall of Fame. 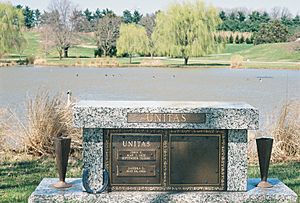 The gravesite of Johnny Unitas in Timonium, Maryland

On September 11, 2002, Unitas died after suffering a heart attack while working out at the Kernan Physical Therapy Center (now The University of Maryland Rehabilitation & Orthopaedic Institute) in Baltimore. A statue of Unitas was erected as the centerpiece of the plaza in front of the stadium named in Unitas' honor. Large banners depicting the NFL Hall of Famer in his Baltimore Colts heyday flank the entrance to the stadium. Towson University, where Unitas was a major fund-raiser and which his children attended, named its football and lacrosse complex Johnny Unitas Stadium in recognition of both his football career and service to the university.

Toward the end of his life, Unitas brought media attention to the many permanent physical disabilities that he and his fellow players suffered during their careers before heavy padding and other safety features became popular. Unitas himself lost almost total use of his right hand, with the middle finger and thumb noticeably disfigured from being repeatedly broken during games. 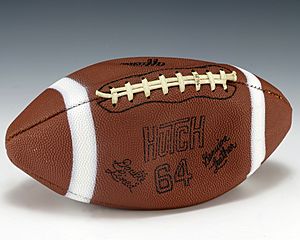 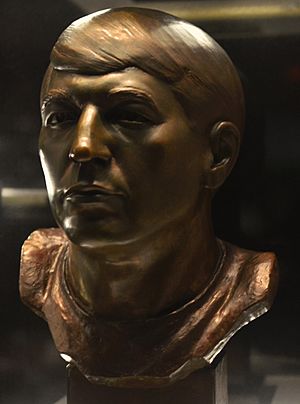 All content from Kiddle encyclopedia articles (including the article images and facts) can be freely used under Attribution-ShareAlike license, unless stated otherwise. Cite this article:
Johnny Unitas Facts for Kids. Kiddle Encyclopedia.