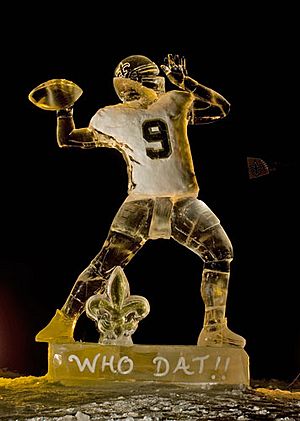 Drew Brees ( born January 15, 1979) is an American football quarterback for the New Orleans Saints. A native of Austin, Texas, he played college football for Purdue and was drafted by the San Diego Chargers in 2001, where he was their starting quarterback until 2006. In 2009, he led the Saints to a Super Bowl championship and was named MVP of the game.

All content from Kiddle encyclopedia articles (including the article images and facts) can be freely used under Attribution-ShareAlike license, unless stated otherwise. Cite this article:
Drew Brees Facts for Kids. Kiddle Encyclopedia.