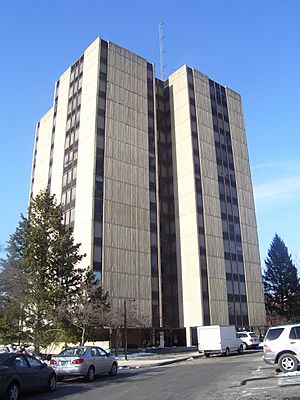 Towson University (TU) is a public university in Towson, Maryland. The university has about 21,117 students. It was founded in 1866. The current president of the university is Robert L. Caret.

The athletics teams of the university are called the Tigers. They have 18 varsity teams and they compete in the Colonial Athletic Association.

All content from Kiddle encyclopedia articles (including the article images and facts) can be freely used under Attribution-ShareAlike license, unless stated otherwise. Cite this article:
Towson University Facts for Kids. Kiddle Encyclopedia.