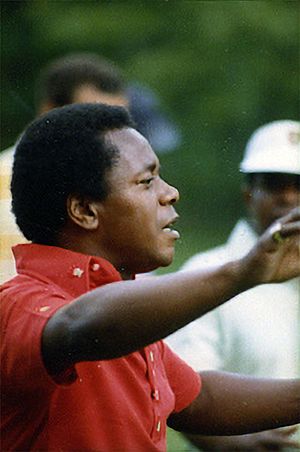 Clerow "Flip" Wilson Jr. (8 December 1933 – 25 November 1998) was an African-American comedian whose career was successful in the 1960s and 1970s. He is perhaps best known for his television variety series The Flip Wilson Show, which earned him a Golden Globe and two Emmy Awards.

All content from Kiddle encyclopedia articles (including the article images and facts) can be freely used under Attribution-ShareAlike license, unless stated otherwise. Cite this article:
Flip Wilson Facts for Kids. Kiddle Encyclopedia.