Julia Gardiner Tyler was born in New York's Gardiner's Island, one of the largest privately owned islands in the United States. She was the daughter of David Gardiner, a landowner and New York State Senator (1824 to 1828), and Juliana MacLachlan Gardiner.

She was educated at the Chegary Institute in New York. In 1839, her family took her to Europe. They first left for London, arriving on October 29, 1840. They visited England, France, Italy, Switzerland, Germany, Holland, Belgium, Ireland and Scotland before returning to New York in September 1841.

President Tyler and First Lady of the United States

Julia, her sister and her father joined a Presidential excursion on the new steam frigate Princeton. During this excursion, her father, David Gardiner, along with a number of others, lost his life in the explosion of a huge naval gun called the Peacemaker. 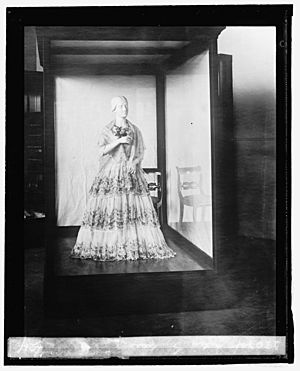 Julia was devastated by the death of her adored father. She spoke often in later years of how the President's quiet strength sustained her during this difficult time. Tyler comforted Julia in her grief and won her consent to a secret engagement, proposing again in 1844 at the George Washington Ball.

After a wedding trip to Philadelphia, a White House reception, and a stay at Sherwood Forest, an estate the president had recently acquired for his retirement, the newlyweds returned to Washington, where Julia thoroughly enjoyed the duties of First Lady.

The anthem "Hail to the Chief" had been played at a number of events associated with the arrival or presence of the President of the United States before Julia Tyler became First Lady, but she ordered its regular use to announce the arrival of the President. It became established practice when her successor, Sarah Childress Polk did likewise.

In the last month of the Tyler administration, she hosted a grand White House ball for 3,000 guests. 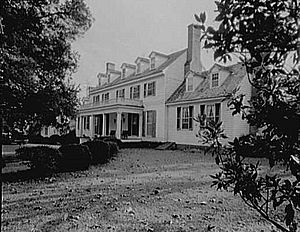 Sherwood Forest Plantation in Charles City County, Virginia, in which she and John Tyler lived after leaving the White House

The Tylers retired to Sherwood Forest, where they lived tranquilly until the Civil War. After her husband's death in 1862, Julia moved north to Staten Island.

She converted to Roman Catholicism and was re-baptized in May 1872. The depression that followed the Panic of 1873 depleted her finances. She returned to Virginia to live with the aid of her grown children. She lobbied Congress for a pension and was granted a monthly allowance in 1880. Following the assassination of President James Garfield in 1881, Congress granted an annual pension of $5000 to widows of former presidents.

Because of the circumstances surrounding her father's death, Julia and John agreed to marry with a minimum of celebration. On June 26, 1844, the President quietly arrived in New York City, where the wedding was performed at the Church of the Ascension, not too far from the Gardiner's residence on LaGrange Terrace. The marriage made Julia the first First Lady to marry a President who was already in office at the time of the wedding. 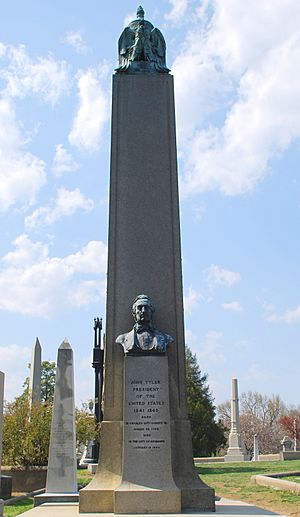 Julia was buried next next her husband President John Tyler, Hollywood Cemetery in Richmond, VA

The bride's sister, Margaret, and brother, Alexander, were bridesmaid and best man. Only the President's son, John Tyler III, represented the groom's family. Tyler was so concerned about maintaining secrecy that he did not confide his plans to the rest of his children. The news was then broken to the American people, who greeted it with keen interest, much publicity. Between 1846 and 1860, Julia and John had seven children together.

Tyler suffered a stroke in Richmond and died there at the Exchange Hotel on July 10, 1889, aged 69. She was buried next to the president at Hollywood Cemetery in Richmond. Her funeral was held in Richmond at St. Peter's Cathedral on July 12, 1889, and was attended by Governor Fitzhugh Lee and Mayor James Taylor Ellyson, with the absolution performed by Bishop Augustine Van de Vyver.

In Bay Shore, Gardiner's Park, a wide expanse of untouched land with trails leading to the South Shore, Gardiner Drive and Gardiner Manor Elementary School are all named after her family. In 2009, the United States Mint honored the former First Lady with the issuance of a 24 karat gold coin. The papers of the Tyler family, including Julia Gardiner Tyler, are held by the Special Collections Research Center at the College of William and Mary.

All content from Kiddle encyclopedia articles (including the article images and facts) can be freely used under Attribution-ShareAlike license, unless stated otherwise. Cite this article:
Julia Gardiner Tyler Facts for Kids. Kiddle Encyclopedia.