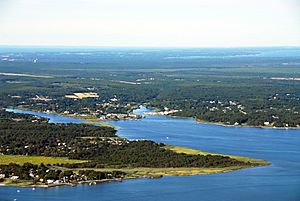 NASA satellite map of the inlet

Moriches Inlet ( moh-RITCH-iz) is an inlet connecting Moriches Bay and the Atlantic Ocean. The name Moriches comes from Meritces, a Native American who owned land on Moriches Neck.

The inlet which split West Hampton from Fire Island was formed by a Nor'easter in 1931. The 1931 storm created a geographic quirk for the western tip of the West Hampton island which is in the town of Brookhaven but in order to access it via land from Brookhaven a person must go through several miles of Southampton (town), New York.

Between 1933 and 1938 Moriches Inlet widened to 4,000 feet (1,200 m) wide and deepened with sand being deposited on both the bay and ocean. The widening subsided in 1938 when the Great Hurricane of 1938 opened up the Shinnecock Inlet further east between Shinnecock Bay and the ocean.

In an attempt to stabilize the deterioration of the barrier island, local authorities built groines on the inlet in 1952–1953. Local authorities have consistently urged that the inlet be kept open to allow boats from the mainland of Long Island to have access to the ocean. The United States Army Corps of Engineers took over the maintenance of the inlets and jetties in the 1980s.

The Corps in turn ran into controversy with claims that the groines and jetties were blocking the natural east to west longshore drift that replenished sand.

The inlet was the primary water access route for recovery ships following the July 17, 1996, crash of TWA Flight 800. News reports noted that it crashed in the ocean about 10 miles (16 km) due south of the inlet.

All content from Kiddle encyclopedia articles (including the article images and facts) can be freely used under Attribution-ShareAlike license, unless stated otherwise. Cite this article:
Moriches Inlet Facts for Kids. Kiddle Encyclopedia.